Often incredibly high on the list for first time visitors to Thailand’s energetic capital city of Bangkok, the Grand Palace and Wat Phra Kaew (also known as the Temple of the Emerald Buddha) are probably the city’s most famous attractions.

Located in the historic part of the city, Rattanakosin and within the same complex, the architectural styles between the two are noticeably different. Whilst the buildings of Wat Phra Kaew are colourful with many ornate features and built largely in a traditional Thai style, most buildings of the Grand Palace are in a more subdued and elegant European style.

This is a taster of what you can expect at this sacred and regal site: 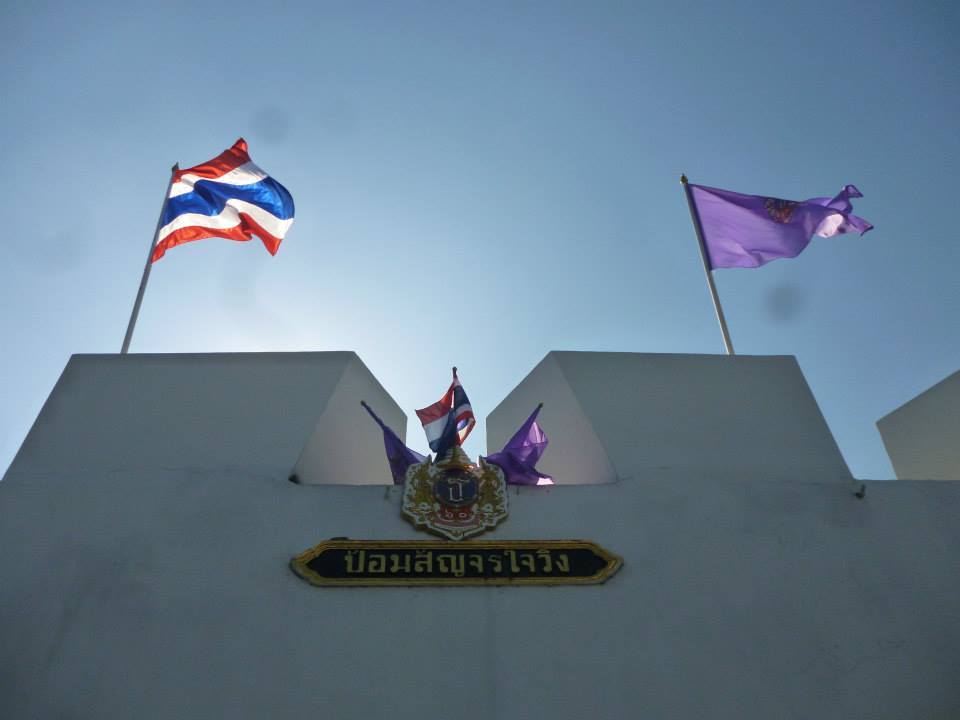 If you thought that you could dodge the admission fees and see most of the highlights from outside, think again! The complex is surrounded by high white walls with only glimpses here and there of what’s inside. In the past, the Grand Palace was the full-time home of the Thai monarchy and contained the Royal Mint, governmental buildings, and the War Ministry … no wonder it is so well-hidden!

An abundance of interesting statues and sculptures Two enormous and ominous looking giants flank the main entrance to the complex, known as Yak in Thai, their eyes boggling and teeth bared. There are other giants around the complex, as well as an array of other mythological creatures, animals, and people. You’ll also notice statues that depict scenes from Chinese folklore.

The Garuda is another common embellishment – a mythological creature that combines the characteristics and appearance of a bird and divine beings. One of Thailand’s national symbols, the Garuda is known in Thai as a Khrut and as a Garula in the ancient religious language of Pali. The multi-headed serpent-like creatures known as Nagas slink down railings and numerous Buddha statues in various poses can be found throughout the grounds. In addition to smaller pictures and paintings, you can stare in wonderment at the stretching and highly detailed wall paintings that show scenes from the Ramakian, the Thai version of the Ramayana epic. Covering the walls of the main building of Wat Phra Kaew, even repeat visitors spot something new each time they look. Although the Ramayana has its roots in Hinduism, it is often a major feature within Buddhist temples around Thailand.

Stylish One Bedroom Apartment near BTS A magical and captivating explosion of vibrant colours covers the walls and roofs of many of the buildings, with Wat Phra Kaew’s main hall being the shining jewel in the crown. The sun bounces seductively of the mosaic tiles, whilst the luxurious golds and silvers reflect even more shimmering light. Golden pagodas and tiled stupas reach up for the skies and there are many ornate pavilions too, adding further to the mesmerising beauty.

Most of the European style buildings also feature electric bursts of colour on the traditional Thai roofs. In some respects, these buildings are made even more interesting for their juxtaposition of styles … Victorian façades with grand columns, elegant balconies, and dainty windows topped with gleaming roof tiles and shimmering soaring spires.

The revered and respected Emerald Buddha Though small it may be, the Emerald Buddha (known in Thai as Phra Kaeo Morakot) is Thailand’s most significant national treasure. Interestingly, the small seated Buddha statue isn’t made from actual emerald; that is just the description given to its colour. Rather, the important figure is made from a block of jade. Taking pride of place in the centre of the hall, many smaller Buddha images surround the headline piece. For visitors who have no strong Buddhist beliefs, the solo statue may not actually be all that impressive. But the hall as a whole, with all its statues, paintings, and grandeur, are sure to delight. Photography is not permitted inside the hall … although you can do as many others do and jostle to try and snap off a picture of the sacred statue from outside the door.

You may find that the Emerald Buddha looks a bit different to how others have described or to pictures that you have seen. This is because the robes are changed at the start of each of Thailand’s three seasons, with the colour of the robe matching the time of year. Because of the venerated nature of the statue, only the King himself is permitted to touch the statue and re-robe it! (The Crown Prince may, if absolutely necessary, perform these duties in place of the King.) The admission cost for non-Thai visitors is 500 THB (approximately 14 USD). This covers both attractions.

As a highly revered site that is very important to Thai people, visitors who are not dressed respectfully will be refused entrance. No shorts are allowed. Men and women must have their arms and legs covered; long trousers and shirts with sleeves for men and long trousers / dresses / skirts for women. Clothing cannot be sheer or excessively lacey. It is possible to borrow clothes at the entrance although you will be required to leave a deposit. It is important to note that unlike many other temples around Thailand, there are very few parts where visitors are required to remove their shoes and bare feet are not allowed. If you wear sandals or flip flops you must also wear socks.

You can book a guided tour on site (extra costs apply) or wander around independently. Audio guides are available for 100 THB (approximately 2.80 USD).

The opening times of the Grand Palace and Wat Phra Kaew are between 8.30am and 3.30pm. You should allow a couple of hours to fully explore the famous attraction.

A word of warning - unfortunately, it is a very common scam for people to be approached by seemingly friendly and helpful folk who say that the palace is closed. They then offer useful “advice” regarding alternative places to visit, which ultimately leads to them just so happening to know a tuk tuk driver who can take you around for the day for a very low cost. Don’t be fooled! You will be taken to some lesser-known spots along with several shops, often where you will be pressured to make a purchase. The easiest way to avoid this is to go and look at the entrance gate to the Grand Palace for yourself. It is rarely closed (unless, of course, it is outside of the official opening hours) and you are more than likely to find that it is a hive of activity with other sightseers.

Even more things to see around the Grand Palace!

Although the Grand Palace is no longer used as the primary home of the King and Royal Family, instead being used solely for ceremonial events and official functions, it is still the official home of the Thai Royal Family. There are many parts of the palace that are off bounds to the public, most of which are home to administrative departments and offices.

Visitors are, however, allowed to admire the lavish interiors of the Grand Palace Hall where you will also see an opulent antique traditional style throne. There is a museum within the fabulous Dusit Hall (included in the ticket cost) that houses an interesting array of regal and religious memorabilia.

Whilst the crowds will be swarming and it will be difficult to get the perfect pictures without somebody’s head in the way, don’t miss the iconic Grand Palace and Wat Phra Kaew when in Bangkok.