White sandy beaches and crystal clear, blue waters: you are not in Boracay, but in the coastal resort town of Pagudpud, Ilocos Norte. Pagudpud is found at the northernmost tip of Luzon Island, in the Philippines. Unlike Boracay, however, this seaside town is a bit more tranquil. Natural beaches can still be found, with minimal development for tourism.

Recently, Pagudpud gained popularity among beach-goers because it offered another beach destination option that one can reach without flying.

Read on to find out about the 12 best things to do in Pagudpud, Philippines.


Witness the beautiful landscape of Pagudpud as well as the majestic sight of the Bangui Windmills; the first wind farm in the Philippines.

There’s more to Pagudpud than its pristine beaches. Read on to find out the Top 10 things you can do in Pagudpud, Philippines.

1. Enjoy the sand, sea, and quiet at Saud Beach

Another side of Saud Beach.

For travelers weary of crowded beaches and commercialized sites, Saud Beach is the perfect place to be. Because Pagudpud is not as developed as the resort towns in the Visayas like Boracay, there are not as many people and not as many vendors peddling their wares. You can lie on the sand without anyone disturbing you. You can enjoy a dip in the clear waters without jostling for space. Saud Beach only has several beach resorts along its coast, so it is best to book with your resort of choice before going to Pagudpud. During the summer season (March to May), rooms may get booked pretty quickly.

2. Visit a "Mountain with a Hole" Bantay Abot Cave

Source: Photo by user Andrew Martin used under CC BY 3.0

Bantay Abot literally means “a mountain with a hole”, which exactly describes this attraction found in Barangay Balaoi, Pagudpud. You can marvel at this beautiful rock formation and wonder how the sea was able to carve out this cave in the mountain. This is the perfect spot for a shot for Photography enthusiasts, while nature-lovers can sit back and fathom the power of nature. Swimming, however, is not allowed in this area because of the strong currents.

Opening Hours: all hours, but recommended visiting hours is daytime.

Access: You can reach Bantay Abot by taking a tricycle from the town center. It is best if you arrange with a tricycle driver for a day trip to nearby places as well.

3. Check out the Timmangtang Rock

From the town center, you can reach Blue Lagoon beach by renting a tricycle. The pristine white beach can be found in Maira-Ira Cove. According to visitors, the crystal clear blue waters can be as calm as a pond during April. During the northeast monsoon season (November to June), the winds from the north can bring waves that are big enough for surfing. This quiet beach will not be as crowded as those in Boracay, perfect for a leisurely swim.

Dos Hermanos islands is named because of the legend of two brothers who vowed to stay together no matter what. Legend has it that the brothers were lost at sea during a storm. Locals could not find a trace of them, after which the two islands “grew” out of the sea. The islands can be reached through a sandbar that appears during low tide. Visitors should explore the islands with extra care because of their rocky and slippery formations. The islands are home to very diverse sea life and according to locals, it is a good source of the seaweed “gamet,” which is the kind that is made into Japanese “nori.” Dos Hermanos is also in Maira-Ira Cove.

Access: From Pagudpud town, you can take a tricycle to get to Casa Consuelo.

6. Take a hike and a dip at Kaibigan Falls

If you are tired of sand and sea, Kabigan Falls in Barangay Balaoi is a good alternative. The 80-foot (24.3 m) waterfall can be reached after a 30 to 45 minute trek from the main highway of Pagudpud. The trek mainly takes you through flat land but nonetheless, the scenery is amazing. About a 10 minute tricycle ride from the town center, the falls is maintained by a local group that collects a preservation fee and provides local guides. All groups are required to get a trained guide who will take care of the group during the trek as well as remind visitors to keep the trail clean. Upon reaching the falls, visitors can take a cool dip in a nearby catch basin.

7. The long and winding Patapat Bridge

The Patapat Bridge is actually a viaduct, or a raised bridge. Found along the highway that connects Pagudpud to the rest of Ilocos Norte and Cagayan Valley, the bridge was constructed 31 meters (101 ft) above sea level. At 1.3 kilometers (1.8 mi) long, it is said to be the fourth longest bridge in the Philippines. From one vantage point along the bridge, you can see how it snakes alongside the coast and the mountains of Pagudpud.

The name Kapurpurawan translates to white, signifying the distinct white color of these rock formations. Located in Burgos, Ilocos Norte, these rock formations were carved out of the land by the sea and the wind. Marvel at how powerful nature can be and how it can create something so smooth and beautiful out of rock. The formations can be reached on foot or on horseback. While some visitors prefer seeing it up close, photography enthusiasts would rather take photos from a distance. Burgos is a town found south of Pagudpud, about 34 kilometers (21 mi) away. This tour south of Pagudpud usually includes Burgos Lighthouse and Bangui Windmills.

9. Take in a bit of history: Burgos Lighthouse

At the height of the Spanish colonial regime, Spanish galleons or trade ships would regularly travel the route between the Philippines and Spain. The lighthouse on Cape Bojeador in Burgos served as one of the beacons of the galleons. Today, the lighthouse has been converted into a public museum. It is also a cultural heritage structure. It still functions as a lighthouse for international ships that enter Philippine waters. Access to the tower is limited to a few people at a time. Visit this lighthouse after or before you visit Kapurpurawan.

Opening Hours: no indication of opening hours, but a lighthouse keeper is present to accommodate visitors.

10. Majestic Bangui Windmills: the first wind farm in the Philippines

From Barangay Balaoi in Pagudpud, you can catch a glimpse of the huge wind turbines that line the coast of Bangui. Bangui is the first town south of Pagudpud. It is best you take this tour with the two other destinations in Burgos. The windmills at Bangui are part of the Bangui Wind Farm, the only one in the Philippines and said to be the biggest in Southeast Asia. It generates power for electricity and supplies 40% of the power needs of Ilocos Norte. Each tower is 60 meters (196.85 ft) tall and has a 6 meter (19.6 ft) diameter base. The wind farm has a substation where personnel can talk about wind energy as renewable energy.

Opening Hours: If you wish to talk to substation staff, the substation is open from 8 am - 5 pm

11. Travel back in time with the Stingray Memorial

Editor’s Note: There’s no photo available at the time of writing

If you are a history buff visiting Pagudpud, you should definitely consider visiting the Stingray Memorial. The memorial is located in Caunayan Bay, which is surrounded by a dense forest and rushing waterfalls. It commemorates the USS Stingray, a naval submarine that was located there during the Second World War. The base played a key role in the war in the Pacific and is credited with helping the allies defeat the Japanese and end the war. You can basically travel back decades in time, as you navigate the same area as American soldiers in the 1940s.

Dos Hermanos means “two brothers” in Spanish. If you are in Pagudpud, however, Dos Hermanos is not actually a pair of brothers or even people. They are two small rocky islands that are right next to each other. The name comes from the fact a popular legend. Supposedly there two brothers who loved each other greatly that perished at sea. Their desire to remain by each other’s side was so strong that after death, they were transformed into two, side-by-side, identical rocks. Visitors love to swim out to the islands and look out onto the impossibly blue water, swim, or watch the sunset.

Let Pagudpud take your breath away

Pagudpud has long been Luzon’s well-kept secret, but perhaps not for too much longer. The serene and tranquil waters and the soft white sand of its beaches beckon the weary traveler. Its natural wonders will leave you in awe at the beauty of nature. 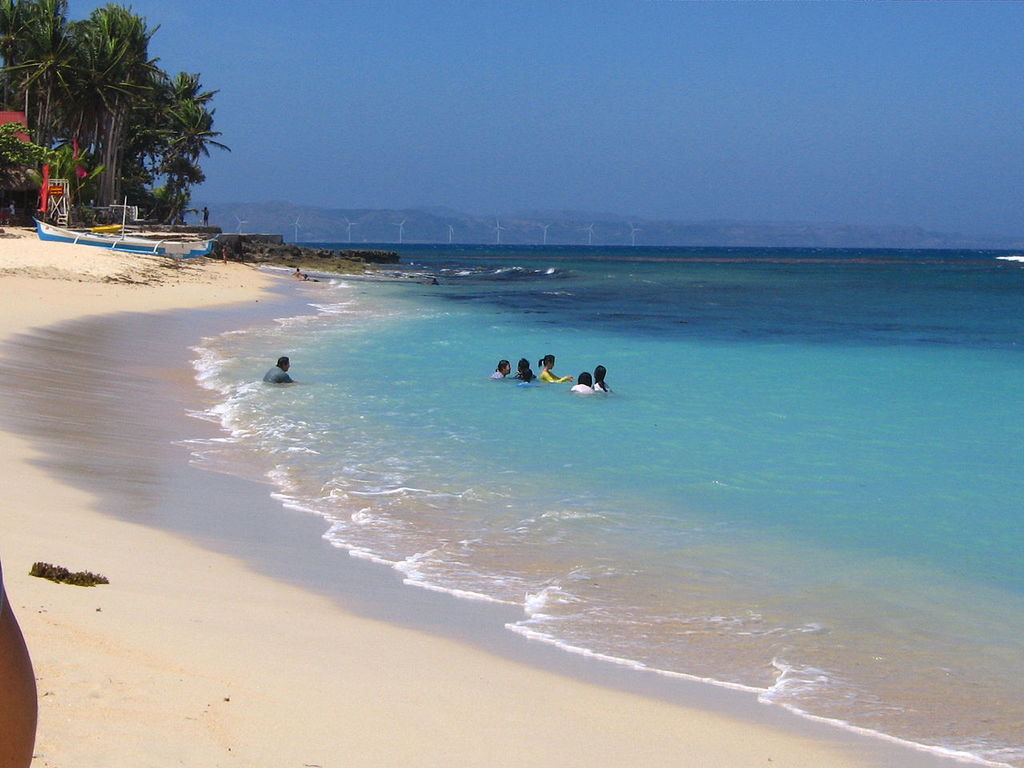 Explore Luzon
Good things are meant to be shared!