Barcelona is well-known for its countless activities to do, food to try, and bars to occupy the night. But for a change and for an added cultural experience beyond the metropolis, why not take some day trips and also escape the hustle and bustle of the city?

Choose between the Pyrenees Mountains that stretch across three countries, the pristine beaches that line the Mediterranean Sea, or small townships that look like they popped out of a fairy tale, all just a drive away.

Go forth and explore beyond Barcelona, because there is more to Spain outside the city! Here are 5 must-take day trips: 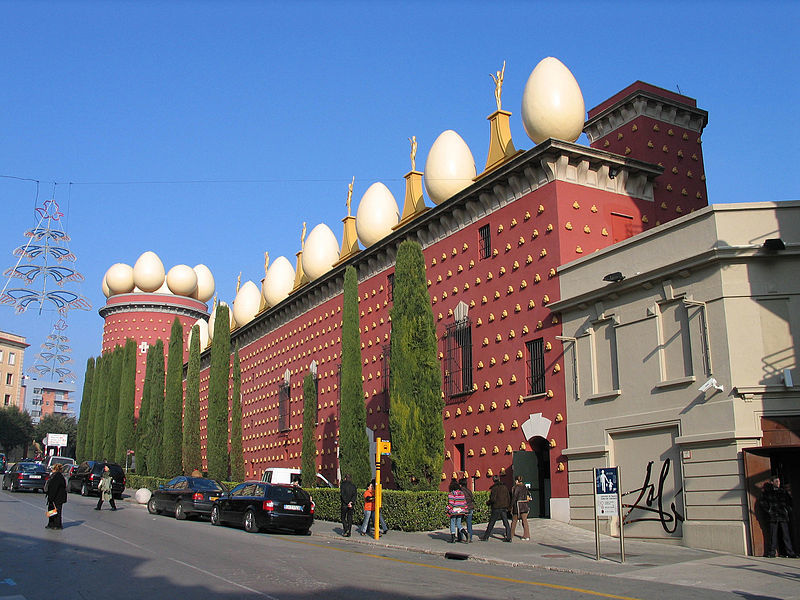 The stunning Dali Theatre and Museum, located in Figueres, Catalonia, Spain, is one cultural spot you must consider when deciding on a day-trip from Barcelona.

In the town of Figueres, it is difficult to miss this iconic pinkish-red building, a representation of bread rolls common to the local food fare, with massive eggs laid on the top of the walls. The museum itself stands as a testament to Dali’s art.

Burial spot and home town of famous artist, Salvador Dali, the museum houses more than 1,500 of Dali’s personal pieces completed during his lifetime. Pieces include paintings, drawings, installations, photographs, and jewelry. Best-known for his works of surrealism and modernism, Dali was one of Spain’s best-loved artists. Additionally, the spot where the museum stands used to house the town’s theater, which was unfortunately burned down during the Spanish Civil War.

Left in ruins for many years before Dali and the mayor decided to rebuild it, the museum plans were finalized and construction began in 1969. With its continuing expansion and addition of other famous art pieces, the entire compound includes buildings and courtyards adjacent to the old theater building.

The highlights of the museum are the 3-dimensional anamorphic living room installation and the glass geodesic dome that crowns the stage of the old theater. Also, Dali himself is buried under the stage floor in a crypt.

To blend the old and the new, the courtyard is complete with Dionysian nude figurines. Many of Dali’s works were modelled after his wife, Gala, after they married in 1934.

An absolute testament to the culture and heritage of Figueres, this museum is a must-see when taking a trip to this part of the world.

Duration: around 10 hours required from Barcelona 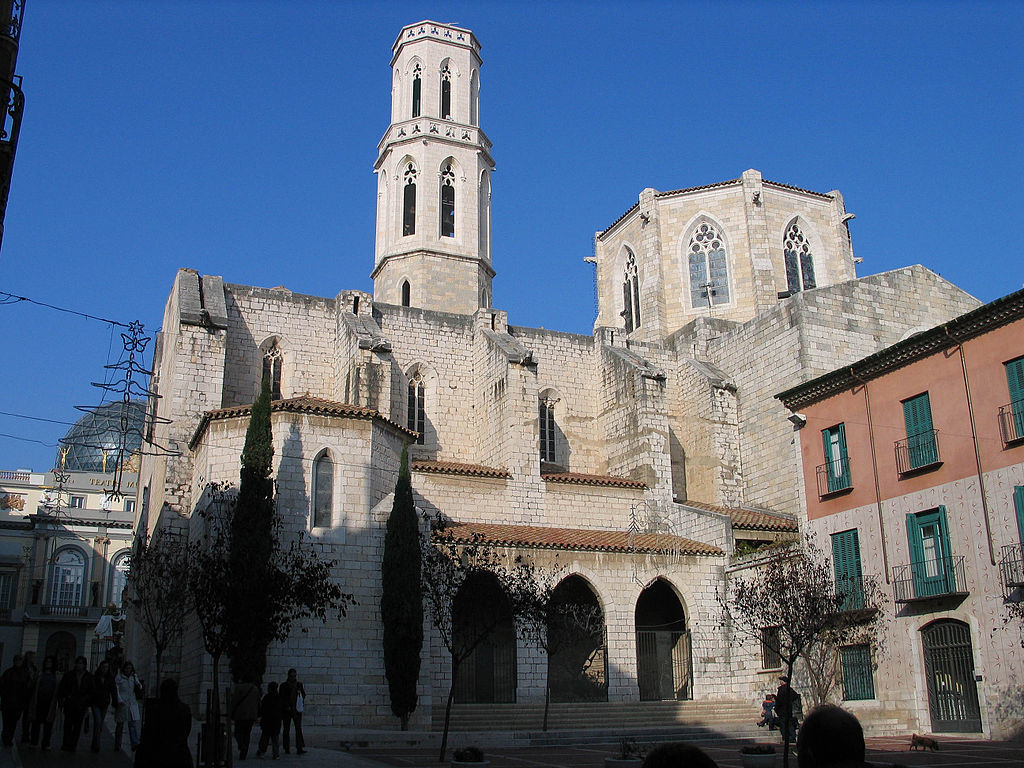 The 10th-century Romanesque and Gothic hybrid church is where the famous artist, Dali, was baptised.

Another landmark that was severely damaged during the Spanish Civil War, it was appropriately restored from 1941 - 1948, with remains of the early structure found within its walls as a reminder of the heritage and culture surrounding the town.

Visit this little piece of history to see the fusion of the Romanesque and Gothic styles of building. It will probably be hard to see so much change in another building elsewhere.

Situated on a hill in Figueres, Sant Ferran Castle is a large military fortress that was built in the 18th century. Also the largest monument of Catalonia, this historical landmark occupies an area of 32 hectares (79 acres) and the cisterns under the courtyard can hold up to 40 million litres (84.5 million pints) of water.

Constructed during the reign of Ferdinand VI of Spain, more than 6,000 soldiers were based at the fortress for protection. In its later years, it served as a prison before opening up for public viewing in 1997. Visitors can easily take in the elevated view by strolling along the pentagonal perimeter that is about 5.6 kilometres (3.5 miles) in total.

One of the best spots in Figueres to take in the view of the city and the vast natural sites beyond, visit Sant Ferran Castle for the tour and the stunning view!

A must-see when visiting Tarragona for a day trip, the Roman Amphitheatre was named a UNESCO Word Heritage Site in the year 2000. These remains are definitely worth a visit as they are mostly left untouched and preserved, unlike their big brother counterparts in Rome, despite having hundreds of thousands of visitors yearly.

The amphitheatre occupies a stunning position next to the sea. Built in the 2nd Century AD, this heritage site is home to great stories of warriors from during the time where Tarragona was one of the capitals of Roman-ruled Hispania.

The Romans were exploratory in their conquests for sports and recreation. Gladiatorial contests, wrestling, executions, and the display of exotic animals were just some of the things that the Romans used this architectural feat to house.

Just imagining the entertainment accompanied by the panoramic views of the Mediterranean, it is no wonder visitors flock to this site to take in the culture and snap some Instagram-worthy photos.

One of the inventions of the Roman Empire, the Pont del Diable, stretches from the outskirts of Tarragona and skirts through the city. The monument, a symbol of architectural advancement, is a UNESCO World Heritage Site.

In a similar style to the Roman amphitheatre, the Pont del Diable was constructed in the 1st century BC as a massive aqueduct that supplied water to the city of Tarragona from 15 miles (24 kilometres) away!

Its interesting two-layer structure forges a link to antiquity in Catalonia. As simple a structure it may seem, it was considered a great engineering feat for the period. Before such a system was implemented, water was manually carried from water bodies to the city. Once it was constructed, the water system was created similar to the automation we know today.

Those who wish to see the 90-foot (27-metre) aqueduct first hand can take a tour on the bridge-like structure and walk along the fine ledge.

While most of Tarrangona’s pristine beaches are situated out of town along the Costa Daurada, spend some time walking along the coast or surfing (if you’re into sports!) on Waikiki, Altafulla, and Tamarit.

The exceptional stretches of golden sands makes the Gold Coast pale in comparison. Right smack between Cunit and Alcanar on the Mediterranean Sea, it is a mere 30-minute drive from the main drag of Tarragona. 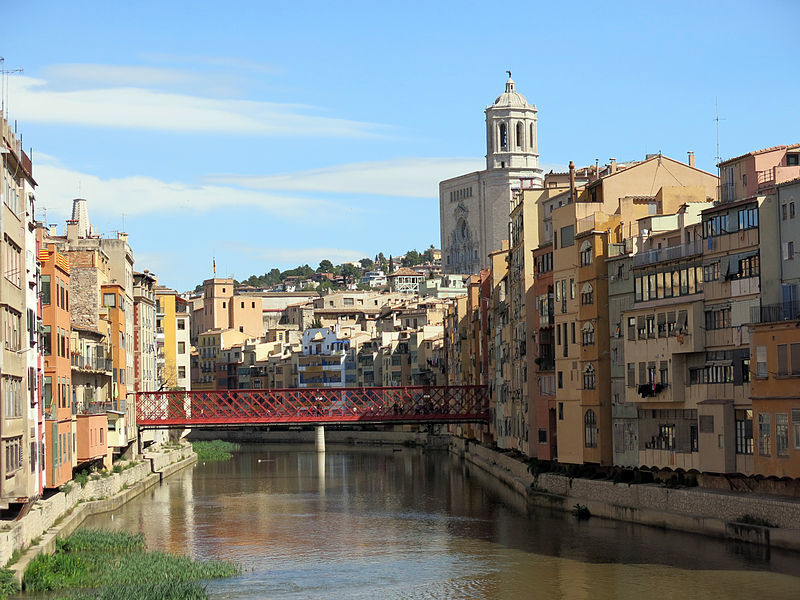 The crown jewel of Girona is the Onyar River. Likely to be the most memorable part of the small city, its rainbow-coloured buildings line up along the river and give tourists an unforgettable sight.

Crossing the bridge to the eastern side, you will find more of the city’s treasures within the cobbled alleys and winding roads.

Ever since the sixth season of popular TV series “Game of Thrones” was released, the small city of Girona shot to fame and became one of Spain’s hottest destinations.

Making use of existing quaint backdrops, the TV series filmed in Girona for an added gothic feel. The historic walled city filled with cathedrals, churches, and winding alleyways similar to Diagon Alley (in Harry Potter) has proven to add character to the series and formed the perfect backdrop for Braavos.

Fancy viewing some of the shooting locations? Check out the Arab Baths that created the fight scene between Arya and Waif!

A mere hour by train from Barcelona, GOT fans can now walk in the footsteps of Arya Stark and take their very own Game of Thrones shots!

So unlike the other day-trips suggested in this list, the Pyrenees Mountains require one day due to their vast coverage over the hills and valleys.

The Pyrenees form a natural border between France and Spain. The microstate of Andorra is sandwiched neatly in between.

The panoramic views are truly different on both sides of the border. To the west, greenery, rolling hills, and heavily-wooded countryside line the paths, and to the east, vineyards and orchards are abundant. Just taking a walk seems like the right thing to do!

Passing by the different countries, there are Romanesque churches that litter the small townships around the mountains.

Visit the 400-kilometre-long (249-mile-long) long Pyrenees Mountains to pass through three countries in a day! This is more fascinating than crossing the line border from Rome to the Vatican City.

The mountain of Montserrat is Catalunya’s holiest site, paired with the best views of the country. Spectacular views invite plenty of walking.

A multi-peaked mountain located near the city of Barcelona, this attraction makes for an interesting day-trip out. Well known as the site of the Benedictine abbey, which hosts the Virgin of Montserrat sanctuary, the mountains play host to such religious sites and provide spectacular views.

Bring along a pair of comfortable shoes because there is plenty of walking, hiking, climbing, and deep breathes involved!

The great getaway from Barcelona!

So there you go! 5 day trips for the avid traveller that offer more heritage outside of Barcelona. We definitely recommend taking time out of your Barcelona trip to visit these sites just for the amazing culture that you can experience in this land of the unexpected!

Don’t forget to wear suitable shoes and clothing for the more rigorous activities such as hiking and mountain climbing!