Castles, Towns, And Snow Mountains: A Day Away From Munich - Updated 2022

Capital of Bavaria and home to the famous annual Oktoberfest celebration, Munich is famous for its night scene and drinking crowd. Millennials flock to Munich for the experience at one of the world’s best place to find craft beers, watering holes, and nightlife.

However, there is more than just drinking to do when travelling to this area. Capture the hearts of your Instagram viewers with the stunning castles and townships that lie near the city. In fact, these historical attractions are so close, you can make it back to the city in time for your evening activities in Munich. Here are some of the top places for a great day trip from Munich: 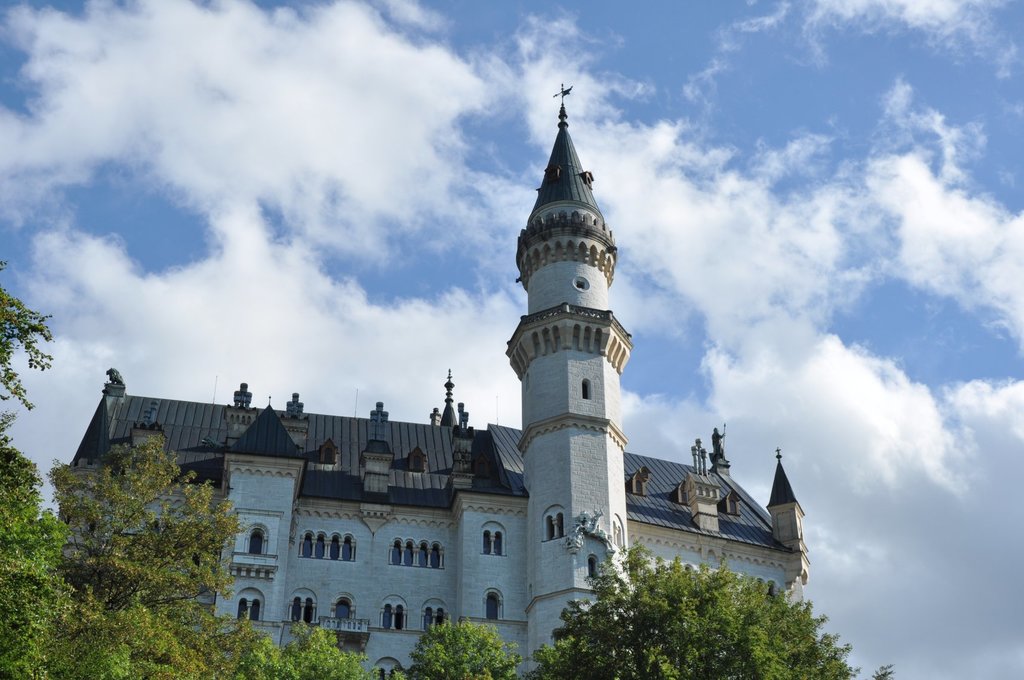 Source: Photo by user nite dan used under CC BY 2.0

Wander amongst Bavaria’s best scenery and royal sites. In the nearby town of Fussen, you’ll find scenic hiking spots and fairytale castles that look like they popped out of a Disney story book. Just north of the Austrian border, its Gothic castles, art museums and thriving violin-making industry draw visitors to this little iconic town.

Neuschwanstein is one of Fussen’s most iconic castles, which attracts visitors from all over the world with close to 1.4 million people yearly. Legend has it that the castle, built in the 19th century, was part of Walt Disney’s inspiration when envisioning how the Cinderella castle at Disney World would look.

In fact, this castle was considered a revival palace in the Romanesque form, so other than Disney-inspired visitors, the castle attracts historians and art fanatics looking for a peak inside one of the most stunning mosaic murals held within the castle. Commissioned by Ludwig II, this castle is truly a sight to behold as it stands amongst lush greenery and the nearby towering mountains.

If you’re the hiking kind or you just want to take a nice dip in the crystal clear waters, look out for King Louis II’s favourite lake, Alpsee. Surrounded by forests, it is located at the foot of the royal castles and is one of the cleanest but coldest bathing lakes in Germany.

Take a scenic stroll around the circular trail along the river banks, which offer amazing views of the lake and the royal castles that are nestled amongst the verdant foliage.

If you’re interested in going to Fussen, there are local trains bound directly for the town that depart from the main Munich station every 2 hours. Considering it’s a short 2-hour journey away, it makes for one of the most popular day-trip options for those willing and looking to explore outside of central Munich.

A picture of you walking through the Bavarian Alps and climbing up to the summit of Germany’s tallest mountain is sure to impress your Instagram followers! Above the clouds and into Austria, this mountain is famous for hosting the 1936 Olympics.

Less than half an hour away from, and one of the nearest ski resorts to, Munich, Garmisch-Partenkirchen’s Zugspitze Mountain is one of the most famous mountains around. Also, it is Germany’s highest mountain and home to the highest beer garden.

Visitors can choose to take a winding train ride to the summit or let the adrenaline pulse through your veins with the scenic cable car ride to the top. If that doesn’t faze you, hand-gliding opportunities present themselves to adventurous folks looking for a bird’s eye view of the Alps.

Just by standing at the highest point, you can see four countries on a clear day. The 2,962-meter (9,718-foot) view is simply breathtaking.

Nearer to the small town of Garmisch-Partenkirchen, Partnachklamm (Partnach Gorge) is another winter jewel of the nearby town. Simply amazing in winter with its snow-tipped trees, giant dripping icicles, and frozen solid waterfalls, it is a true winter wonderland and one of the only few gorges in the world that is open during winter for hikers.

While the actual gorge is only 700 meters (2,297 feet), there is plenty to explore that makes it a more intensive hike. A local’s secret, Partnachklamm is generally not crowded, giving tourists the impression that they have the entire attraction to themselves. If you’re not confident to navigate the gorge yourself, there are guided torchlight tours of the gorge where you can really get into the tunnels and see the light shine on the icicles.

When back in Garmisch-Partenkirchen, admire the traditional Bavarian culture and amazing history that the small community has to offer. It is truly the perfect place to immerse yourself in the Bavarian Alpine culture and it offers a once-in-a-lifetime opportunity to live like a local.

Salzburg is considered to be the storybook of Austria, located beside the fast-flowing Salzach River. With its alpine landscapes, narrow alleys, and cobblestone streets, it is one of the most picturesque towns around. Salzburg translates to “Salt Fortress”, and it gets its name from the barges carrying salt on the Salzarch River.

Internationally-renowned for the baroque architecture that fills the city, it is considered one of the best-kept city centres north of the Alps, with many visitors dropping by to look at the colourful architecture. Listed as a UNESCO Heritage Site in 1997, it was the birthplace of the famous 18th-century composer, Mozart.

Additionally, the city was the setting for the famed musical and film, The Sound of Music. The town centre sits comfortably in the eastern Alps, on the borders they share with Germany, and is surrounded by towering peaks: Mönhsberg, Gaisberg, and Kapuzinerberg.

Start exploring the city of Salzburg and work your way out to the well-known castle, Hohensalzburg Castle, nestled amongst the forests. It can be reached by either foot or railcar. One of the main attractions in Salzburg, the castle sits atop the Festungsberg and is the largest completely-preserved castle in central Europe.

Within the city, take a walk down Goldgasse, where Salzburg’s most charming street is filled with small antique and jewellery stores. Nearby, visit the birthplace of Wolfgang Amadeus Mozart, where the museum showcases some of his personal belongings including his childhood violin.

Salzburg is an ideal day trip if your time in Munich is short. You will experience the serenity of the Bavarian countryside and take a trip back to the past with the historical cobblestone-filled streets and grand castles.

Picturesque and perfect for winter visitors, Rothenburg is part of the popular Romantic Road through southern Germany. Halfway down from Frankfurt and Munich, it is famous for being the most German town around.

Small but iconic, the town fountain is surrounded by half-timbered buildings, giving the entire town a nice medieval feel. Despite its warm and welcoming appearance, it remains Germany’s best-preserved walled town. With its strong, tall fortifications and intimidating gates, Rothenburg has held its title not only as the best-preserved walled town but also as the Fairytale Dream Town.

One of the key attractions in Rothenburg, the prestigious St. Jakob’s Church holds a must-see art piece, a stunning 500-year-old altarpiece by a German woodcarver, Riemenschneider. Riemenschneider was considered to be the Michelangelo of German woodcarvers, with unparalleled skill and his art piece so realistic it takes a few close-up looks to see the Biblical scenes he portrays. A must-see for all first-time visitors, it is considered one of Germany’s greatest pieces of woodcarving.

If you’re intending to visit Rothenburg, be warned, you might find yourself walking into many small shops along the main street. Souvenirs such as prints, carvings, wine glasses, ornaments for the Christmas tree, and craft beers are common to find and make great gifts for friends and family. Tourists flock to Rothenburg just for its annual Christmas Market that happens every December, with its quaint little shops and make-shift stalls, it truly feels like Christmas here!

Rothenburg is not only just about shopping in small streets; it is also one of the prettiest idyllic towns around. For an unblocked view of the township and the surrounding countryside, take a trip up the Town Hall tower. You can also wander around the town walls for more terrific vistas; the 1.5-mile (2.4-kilometer) stroll will give you a 360-view of the rolling hills and mountains that envelop the town so nicely.

Berchtesgaden is a neat little town with many attractions that lie just outside of the city centre. A former retreat for kings, monks, and travellers, the town has much to offer in terms of natural attractions.

Winbacklamm Waterfall is one of those must-visit attractions. A small tributary to the river of Ramsau, it runs down a narrow gorge that cuts into the Watzmann Mountain nearby. With its well-kept wooded footpaths and idyllic surroundings, it is a hidden gem in a region of wonders.

Another attraction that is more popular and well-known to tourists is the Eagle’s Nest. Built for Hitler’s use as a retreat outstation, it was converted to a restaurant that gives visitors a view of up to 120 miles (193 kilometres) on a clear, sunny day. Situated on top of a hill, it used to be a mini fortress and is now also home to a Nazi Documentation Centre.

Lastly, take a scenic ride on King’s Lake, otherwise known to locals as Königssee. King’s Lake is a gorgeous natural phenomenon. The emerald crystal-clear lake is lined by snow-capped Alpine mountains. Nestled within the valley, it is Bavaria’s deepest lake, at 630 feet (192 metres) deep.

Experience the serenity as you sit on a vintage-looking electric ferry that glides you quietly past the rushing waterfalls, scenic boathouses, and tall, lofty mountains. While on the boat, catch a glimpse of the Church of St. Bartholoma, with its iconic red onion domes that stand out in the sea of emerald and lush greenery.

Also check out the Ice Chapel, a year-round glacier that has a natural cave. It’s simply stunning!

Don't waste those days away! While Munich is famous for its night scene and friendly drinking crowd, there is much more to do around the area. Find your inner peace with the stunning castles and small medieval townships that lie close to the city. Combine daytime sightseeing and night time partying for a totally awesome and memorable vacation in this splendid part of Germany.

Our happiest moments as tourists always seem to come when we stumble upon one thing while in pursuit of something else.” Lawrence Block