Huis Ten Bosch opened for business in 1992 in Nagasaki’s Sasebo city. A theme park replica of a European city, there are many attractions such as the seasonal flowers. After playing during the day, night brings out the romantic illumination of the park. Presenting nights at Huis Ten Bosch! Huis Ten Bosch’s “Kingdom of Light” has a face for each of the four seasons. It has been chosen number one for the Illumination Ranking’s Overall Entertainment class by night scenery judges, who judge the world’s top three nightscapes.

Each time the curtain of night drops on Huis Ten Bosch the view changes suddenly and completely. Each hour the symbol tower of Huis Ten Bosch, “Domtoren” is lit up with different colors, with the light cascading down onto the canals below. The atmosphere at Thriller City is to die for. With a horror story motif the Japanese haunted house and other chilling ghostly attractions will definitely cool down those warm nights. Excitement fills the air as the night drifts along, the first of its kind in Japan, a 3D projection mapping paired with illumination show starts. The atmosphere at Thriller City is to die for. With a horror story motif the Japanese haunted house and other chilling ghostly attractions will definitely cool down those warm nights.

Excitement fills the air as the night drifts along, the first of its kind in Japan, a 3D projection mapping paired with illumination show starts.

All 3 projection mapping shows are a must see! After the show at Thriller City ends, the next one starts at Stad House, which houses the Flower Clock in Amsterdam City. The 3D projection mapping show here begins with colorful images, then spits fires, and changes the shape of the building with dizzying effect. It ends with the legendary dragon awakening, said to sleep in Stad House.

Next up is the “Zipang Detective Club Building” and its show, “Glimpse into the future, a time travel into the future” show. At the end of the show you can take a commemorative picture with the robot shown on the building. If your stomach starts to growl at you with hunger head to the symbol tower “Domtoren” seen from anywhere in the Huis Ten Bosch grounds. There are many restaurants to choose from in the food court here. On the B1 floor with the Canal Cruiser canal boat docks, is the food court terrace. On the first and second floor are restaurants unique to Sasebo such as “Toruko-rice”, “Champon”, and “Sasebo-burger”.

Here we have the Lemon Steak from “Rode Leeuw” steak and burger restaurant. You can satisfy your beef cravings with local Nagasaki Blackhair Wagyu steaks or burgers. The Lemon Steak served on a sizzling iron plate is a Sasebo specialty! Who knew lemon went this well with beef.

As night descends on Huis Ten Bosch romance fills the air, when the illuminations light up. There are almost too many things to experience such as the musicians and masquerades. You can revel in the illuminations in the “Kingdom of Light” which change every season, or go on a projection mapping show frenzy. 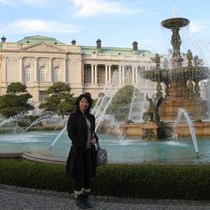 Explore housetenbosch
Good things are meant to be shared!