Known as the Big Apple, New York is famous for its entertaining Broadway shows, delicious street food and desserts, bustling atmosphere, and of course, its iconic landmarks such as the Empire State Building, Central Park, Times Square, and Brooklyn Bridge just to name a few. One of the greatest and most vibrant cities in the world, New York is always bursting with endless activities at every turn. Whenever you’re travelling, it’s always important to fuel up your appetite! If you’re visiting New York City anytime soon and you’re not sure of what to eat, don’t worry as we’ve compiled a list for you to try. A black and white cookie, also known as half-and-half cookie is a round-shaped cookie which is usually frosted on one half with vanilla and on the other chocolate. This sponge cake-like shortbread is common in New York City and is usually eaten on both sides to get a taste of both vanilla and chocolate for that perfect balance. Originating from Glaser’s Bake Shop in Yorkville, this delicious treat was founded by Bavarian immigrants back in 1902. When your sweet tooth calls, Russ & Daughters has the best black and white cookie in New York City.

Arepas de choclo is a cheese-stuffed corn cake. This South American dish has its roots in Colombia and Venezuela and is usually eaten at breakfast but any time of the day would be perfect, too. The best place to get Arepa de chocolo in this city would be Arepas Cafe, a Venezuelan restaurant with a diner setting and a variety of arepas and dishes for dine-in or takeout. Whatever filling you choose for your arepas, it’s enough to satisfy your cravings as they are filled generously. Pizza in New York City comes in all sizes, taste and prices. If you’d like to find the most convenient and affordable pizza, you might want to try the dollar slice which is a slice of pizza for the price of a dollar. It’s the best thing to eat if you’re in a rush and want something quick for a bite. One of the best places to get a dollar slice would be this no-frills pizzeria joint called 99 Cents Fresh Pizza. Staying true to its name and with locations all over the big city, it’s the place to be for a fast and hot slice of pizza. They are open till 5am so it’s great for a late night craving as well. What’s a trip to New York if you don’t try Shake Shack? This famous burger chain has been open since 2004 in New York City. What started out as a hot dog cart inside Madison Square Park in 2001 has now become one of the most famous American fast casual restaurant chains with plenty of locals and non-locals come back for more. Shake Shack is known for its burgers, hot dogs, and milkshakes. It has even expanded to countries such as Dubai and Singapore, which shows how much it’s well-liked by people across the world. If you’re dining at Shake Shack, try the ShackBurger which consists of a single or double Cheeseburger topped with lettuce, tomato, and the original ShackSauce.

Chicken and waffles are pretty self-explanatory. Two of the best foods in the world combined and you get one of the tastiest dish ever. This sweet-and-savory combo is well-loved by New Yorkers and even tourists. What’s best about this dish is that you can have it at any time of the day. Amy Ruth’s has got the most scrumptious homemade fried chicken and fluffy waffles in the city. This 24-hour eatery has been welcoming locals and non-locals with its home-style Southern cuisine and warm hospitality since 1998. Their specialty is none other than the the classic chicken and waffles which will definitely make your trip memorable. An iconic dish to try when in New York is pastrami. Pastrami, which is made from beef, pork, turkey, or mutton is usually highly seasoned and served in thin slices. At Katz’s Delicatessen, a no-frills deli with theatrically cranky service serving tasty sandwiches since 1888 sells pastrami on rye, which is a favorite dish among New Yorkers. Their pastrami is cooked using a slower method, which best flavors the meat and there’s also no additives or chemical added. Each week, thousands of visitors from around the world visit Katz’s Delicatessen to dine in this deli, and to have a taste of the most delectable sandwiches, platters, and meats.

A healthy and tasty seafood option, grilled octopus can be found in Italian, Japanese, Greek, Spanish, or even French restaurants across the city. Where’s the best place to eat grilled octopus? Head over to Taverna Kyclades where they serve the best charcoal-grilled octopus. Perfectly cooked with great sear and texture and paired with the Kyclades salad, this dish exudes real Greek flavor in New York City. If you’re a seafood lover or simply enjoy eating octopus, this is a meal you don’t want to miss out on. A quick and fuss-free dish, meat over rice has gained popularity over the past years for its taste and convenience. The best place to get meat over rice would be The Halal Guys. It is a halal fast casual restaurant franchise that started as food cart in New York City now has restaurants across the world. The Halal Guys are known for the primary dish which is the platter of chicken or meat with rice. Enjoy the platter with condiments such as their original red hot sauce and you’ll be coming back for more. The Halal Guys has many outlets across the city so make sure you research whichever is nearest to the destination you’re visiting. New York is home to an endless list of tasty food and eateries. Next time you’re in the Big Apple, try out any of the food that’s listed above and you’ll be making your trip a memorable one. 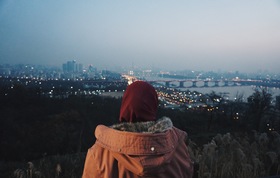 Born and raised in the Lion City, a notebook hoarder, and (too much of) a coffee lover. Her travel goals include visiting Kashmir for the mountains, Iceland for Aurora Borealis and Great Barrier...Read more
Want to contribute as a Local Expert?
Register Here
Hotels
Lowest Price Guarantee