12 Of The Best Delis In NYC

New York City is the premier travel destination in all of the United States. It’s perhaps the greatest food city in the world rivaled only by Paris and Tokyo. From the most amazing hotels with restaurants to some of the best cheap Airbnbs, you’re sure to find a neighborhood with great food in NYC. There are a few foods you absolutely must try when you are in New York City. A dirty water hot dog is a must, as is a nice meal in a steak house, but perhaps the most quintessentially New York place to eat is a deli. There is no one “best Jewish deli” in NYC as there a number of great delicatessens where you can find all the comfort food from pastrami to bagels. For a long time Carnegie Deli was usually at the top of any list ranking delis, but now that the famous eatery has closed these are the delis that are in a battle for the top spot. Here are some of the best delis in NYC. Source: Photo by user Tjeerd Wiersma used under CC BY 2.0

Pastrami Queen used to be Pastrami King, but the name change and move from Brooklyn to Queens didn’t affect the quality of this pastrami one bit. It is one of the best NYC delis and is now located in Manhattan on the upper east side, Pastrami Queen still offers high-quality food at an affordable price. The pastrami on rye has the perfect blend of spices, and it’s incredibly succulent. Barney Greengrass on the upper west side is the place to go if you’re looking for high-quality smoked fish. This New York delicatessen has a selection that is beyond impressive - from salmon to herring to sturgeon. Lox on a bagel at Barney Greengrass might be the ultimate New York City breakfast. It has earned the name the Sturgeon King. The 2nd Ave Deli gets it name from its original location. It first opened in 1956, and even though it has moved since then the succulent meats are still some of the best in all of New York City. All your favorite Jewish staples can be found at the Second Avenue Deli. A nice corned beef sandwich with a bowl of matzah ball soup are a perfect combination. Unlike many other delis, this one is open 7 days a week, including Saturday (the sabbath). The deli is Kosher, but some Orthodox Jews choose not to eat there because it is open on the holy day. Source: Photo by user Eden, Janine and Jim used under CC BY 2.0

Herring? Check. Lox? Check. Pastrami? Check. Sturgeon? Check. Gifilte fish? Check. All the staples of a high quality delicatessen are at Sarge’s. However, you may be shocked at some of the other things on the menu. Steak, cheesecake and BBQ ribs? It’s all here too in this famous New York deli. Surprisingly the quality of the food is all top-notch even though there are hundreds of items on the menu. This is what happens when a deli and diner come together in one. David’s Brisket House has a name so simple that you can easily tell what this deli is all about. This brisket is so soft and moist that you won’t even have to worry about adding mustard. This Brooklyn hot spot has a long and storied history that is as intriguing as the delicious menu items. When the restaurant opened over 50 years ago it was run by a Russian Jew named Dave. The name remains, but now it is run by neither a Jew nor a Dave. In fact, this top notch Jewish Deli is run by a Muslim. This is a Halal deli now, and it’s a testament to the power of delicious meat. No matter your background, food can truly unite us as humans. Source: Photo by user Kate Hopkins used under CC BY 2.0

This Kosher deli in Brooklyn has all your favorites from chopped liver to pastrami. The stuffed cabbage rolls are huge, and there is even a wide selection of desserts. This is an authentic Jewish deli and the prices are extremely affordable. It’s one of the gems on the Brooklyn deli scene. If you have ever seen the tv show Louie you are probably familiar with this famous delicatessen. Herring is the popular dish here, and you are meant to eat it right then and there in one bite. Russ and Daughters has been around since 1914, and it’s a staple of New York City culinary history. There are actually three location now. There’s the original appetizing store, a sit down restaurant and a Russ and Daughters in the Jewish History Museum.

Private Tastes of the Lower East Side Tour When you think New York City you probably think of Katz’s Deli. This delicatessen was on the map long before the famous orgasm scene in the Billy Crystal and Meg Ryan comedy When Harry Met Sally. Frankly, the mountain of corned beef and pastrami is even better than actual sex. The slow cooking process results in juicy and tender sandwiches. There are so many sandwich combinations to choose from including the tongue, liver, corned beef, and pastrami. A nice bowl of matzah ball soup is a perfect accompaniment. Katz’s has been around since 1888, and it will likely last another 100 plus years. Ruper Jee’s Hello Deli is a one-of-a-kind local shop serving mouth-watering sandwiches. Their penchant for naming sandwiches after celebrities and famous New York references has gotten them featured on The Late Show with David Letterman – and yes, they do have a Letterman sandwich, as well as one named after Stephen Colbert, and a number of others. You cannot go wrong regardless of which one you pick, but friendly owner Rupert is always glad to give recommendations. Source: Photo by Flickr user peapodsquadmom used under CC BY 2.0

NY Grill & Deli has become a staple in New York. With multiple locations open across the city, you can be sure the high-quality food on offer will satisfy your tastebuds. Their breakfast sandwiches and bagels are local favorites, while their extensive list of hot sandwiches leaves customers spoiled for choice. Yankees Special and NY Special are popular sandwiches, while their Chipotle Bacon Burger is no slouch either. Do yourself a favor and visit NY Grill & Deli for a bite to eat – you won’t regret it. If you want an unpretentious hole-in-the-wall deli with sandwiches and dishes packed with delicious flavor, then Al’s Delicatessen & Catering is the place to go. Regardless of your preferred style, this place is sure to have a sandwich or meal that will catch your interest. Local favorites include a Reuben sandwich, a delicious gyro, and their best seller called Burrito Sensation. They also serve an extensive breakfast menu, including fruit pancakes, breakfast burritos, and egg sandwiches. With over 20 years in the business, the owners know what they are doing. Stop by and enjoy a great meal at Al’s Delicatessen & Catering.

Delis are the heart and soul of the NYC food scene Source: Photo by user City Foodsters used under CC BY 2.0

A corned beef or pastrami sandwich is the quintessential New York meal. Delis have been satiating the hunger of tourists and locals for over 100 years, and they will continue to do so for may years to come. Delis are what make the NYC food scene so vibrant. They are a historic part of the city. Immigrants brought their food customs to America so everyone could enjoy them, and delis are a prime example of that. The next time you are in New York be sure to stop by one of these delis. 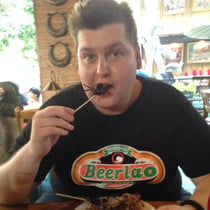