Things to do for families US > South Carolina Midlands > Aiken

South Carolina’s Thoroughbred Country is filled with horses and horse people, but there is so much more. A lot of history took place near Aiken and North Augusta, South Carolina. As a result, two historic inns, five special attractions and three great eateries should be included on anyone’s trip itinerary to the region.

1. Luxurious hotel with a fascinating history South Carolina’s Thoroughbred Country deserves more than just a day trip, so the big question becomes, “Where should I spend the night?” To fully immerse yourself in the personality of the region, a great suggestion is The Willcox Hotel in Aiken. After all, if The Willcox has been good enough to host Franklin Delano Roosevelt, Winston Churchill and Elizabeth Arden, then surely it will meet your accommodation needs very nicely. This hotel has been welcoming guests for over 100 years and continues to be a premier choice for Aiken visitors.

Elegantly appointed rooms with high ceilings, crown moldings, soaking tubs, a fireplace and a nightly turndown service also include complimentary WiFi and a full cooked breakfast. The restaurant on site is outstanding, but the location of The Willcox is perfect if you want to venture further out for food, recreation or the many equestrian events that are a yearly focus for Aiken. Rosemary Inn Bed and Breakfast was built in 1902 with exquisite classic style and southern grace. Rosemary Inn has a decided antebellum flair with its wide front porch and tall, circular columns. Owners Kelly and Diana Combs have invested years of hard work and money into restoring the home to its original grandeur and love showing their guests all of the special features. They make their own home inside the inn and are on hand to provide attention and to serve a fabulous breakfast every morning.

Each of the six guest rooms is distinctly decorated, but each has a fireplace, a feather mattress cover, down pillows and extravagant linens in keeping with the home’s grandeur. The complimentary refreshment station is a welcome amenity as are the complimentary wireless internet and newspaper delivered every morning. Nightly turndown service with a sweet treat is a great way to end a day in North Augusta. Watching Elizabeth Ringus at work in person has to be the number one reason to plan a visit to Little Red Barn Pottery & Art Gallery in Barnwell, South Carolina, just outside of Aiken. As a Master Potter, she has amazing skill and talent. Her face jugs are known around the country, but her functional stoneware pieces are also exceptional. At the gallery, which is a former commissary moved to its present location in the 1950’s, you will also find works of other artists and craftsmen for sale. Jewelry, paintings, birdhouses, shawls, soaps and so much more are displayed and provide endless gift possibilities. The Jim Harrison Gallery is technically in Denmark, South Carolina, only a few miles from Aiken. The first time Jim Harrison picked up a paint brush it was to help J. J. Cornforth paint a huge Coca-Cola advertisement on the side of a hardware store in Denmark. He went on to paint 100 more such signs and eventually he was an official licensee of the Coca-Cola corporation, meaning he could incorporate their logo into his own paintings. After college, he spent a number of years as an athletic coach but realized that his passion was art. Harrison is also well-known for paintings of covered bridges, the coast, sports mascots, gamecocks, palmettos and many scenes that people from South Carolina will recognize. Imagine a plot of land that is legally deeded to God. That’s exactly the case with God’s Acre Healing Springs in Blackville, South Carolina. During the Revolutionary War, some soldiers were wounded and taken to the springs to drink and be bathed. A couple of men were left with them to bury the wounded when they died. However, in just a few short months, they were all able to return to the war after supposedly being healed by the properties in the water. The land itself changed ownership a number of times, but the last owner legally named God as the owner in his will, and he installed signs in the area to that effect.

People today come from miles around to fill their jugs with the special water and contend that it still has curative powers. The big house on the property was built by the slaves of James Henry Hammond in 1859, specifically for the purpose of showing off how wealthy he was. The two-story, Greek revival style home sits at the top of a hill which overlooked the gardens, fruit trees, vineyards and a driveway lined with magnolia trees. It was inhabited by more than three generations of the Hammond family before it was donated to the State of South Carolina in 1973 and soon after opened to the public as a historic site.

Park rangers give a very frank and informative tour, explaining the life and times of both the plantation owner and the slaves. It is open seven days a week from 9:00 a.m. to 6:00 p.m. The Living History Park is the result of the vision and hard work of the Olde Towne Preservation Association. They wanted a place to preserve the history and heritage of not only North Augusta but all of the surrounding area. Buildings representing the way of life in the 1700’s have been built and are used for demonstrations by individuals in period dress. They include a meeting house, a blacksmith’s forge, a tavern, a school, a post and print shop and several cabins. Gardens are also scattered throughout the park.

The Living History Park is a great place for concerts, picnics and community events, but on the last Saturday of every month, buildings are open and re-enactors demonstrate colonial skills.

8. Malia's, a restaurant favorite in Aiken Malia’s is one of the top-ranked restaurants in Aiken, thanks in large part to the creativity and skill of Malia Koelker and her stepson Matthew Shackleton, who are co-owners and co-chefs. Their flavorful dishes are loaded with high-quality, fresh ingredients, and the menu changes often to reflect the whims of the chefs and the availability of produce and meats. It is located in the Alley, a popular pedestrian spot in the heart of downtown Aiken. Malia’s is closed on Sunday and Monday, open for lunch only on Tuesday, and for lunch and dinner Wednesday through Saturday. 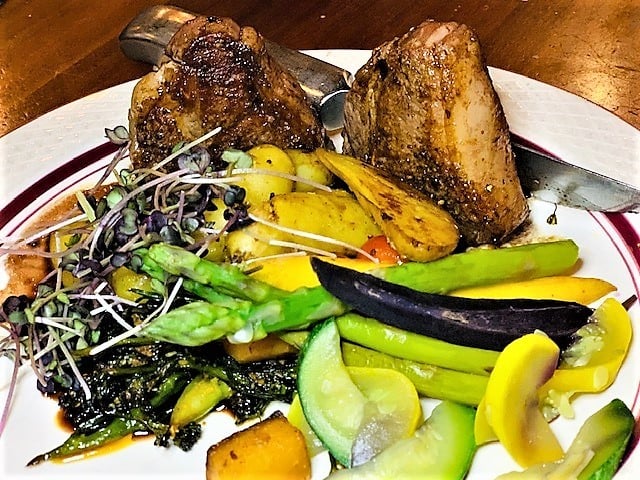 Chef Manuel Verney-Carron showcases his talents at this bistro located in Hammonds Ferry, a planned community in North Augusta, South Carolina. Blue Clay Farm is also incorporated into Hammonds Ferry, and its bounty appears in many dishes at the cafe. Chef Verney-Carron combines his French background with the taste preferences of folks in South Carolina to everyone’s delight.

When you walk in, you’ll be greeted with a display case of amazing cakes and desserts, so you’ll certainly want to save room at the end of your meal or plan to take a sweet treat home when you leave. Although recently refurbished, Sno-Cap Drive-In maintains the same vibe it had when it opened in 1964. Black and white tile floors with red vinyl booths and plenty of bar stools at the counter make you think that surely Fonzie and the gang from “Happy Days” or Danny and Rizzo from “Grease” will walk in at any minute. Burgers and hot dogs star on the menu along with root beer floats and thick shakes.

For a bonus, horses must receive some recognition Horses and all things pertaining to horses are, in fact, the reason many people come to this part of South Carolina and is the inspiration for the region’s designation as Thoroughbred Country. In fact, Aiken is one of the few towns in the country where horses have the right of way. It has been called the “Polo Capital of the World,” and horse trails are everywhere. Fox hunting, steeplechase races and dressage riding tournaments attract crowds of horse lovers from around the country and beyond. The countryside is dotted with immaculate horse farms and beautiful thoroughbreds grazing contentedly. It is a peaceful, bucolic sight.

The rich and famous names from past and present United States history and pop culture may have claimed Aiken and the surrounding area for themselves when they realized their horses would be welcomed with open stables and grazing land. The mild climate may have lured them from harsh winters up north. But, the rest of the world has also discovered this marvelous part of the country and finds itself returning again and again.

There is much more history to be learned and many more dishes in other restaurants to be savored, so make your plans to visit Thoroughbred Country soon.

Explore Aiken
Good things are meant to be shared!