A major city in the United Arab Emirates, Dubai is a paradise of technological advancement and modern attractions. It is characterized by skyscrapers that dominate the busy skyline and a dramatic cityscape that is illuminated at night with a multitude of city lights. The upscale architecture in this city will take your breath away, and the nightlife will impress you with how vibrant it is. Here, you’ll find the tallest building in the whole world, called Burj Khalifa, as well as man-made islands. Tourists love coming to Dubai for a shopping spree as it has an overwhelming number of luxury boutiques. If it’s the food you’re after and you’re not into high-end restaurants, go old-school and check out this list of the best street food you must try in Dubai, United Arab Emirates. An authentic Middle Eastern dish, shish tawouk sandwich is one of the most popular street food in Dubai. This dish is somehow closely identical to jujeh kabab—a traditional Persian fare. For those who have no idea what a shish tawouk sandwich is, it is basically a sandwich with marinated chicken as its filling. Vendors of this snack use chicken breast for its tender meat. Some add Greek yogurt for the extra sour taste, while others stick to lemon juice, tomato paste, olives, and other herbs and spices. Another authentic Middle Eastern fare that you should try while in Dubai is knafe. Unlike shish tawouk sandwich, a knafe is not a grilled delicacy but more like a dessert. It is a mouthwatering sweet treat that is round in shape and looks like a pie. Its main ingredients are dough, sugar, and cheese. Sellers also add almond and pistachio nuts as toppings. The sugary taste comes from the syrup in which it is dipped and the layers of cheese on top. A popular street food in almost all parts of the world, falafel is actually an Egyptian dish that has been adapted and customized by various countries. Basically, it is a patty that resembles a doughnut in shape. It is round and sometimes flat. Most vendors utilize fava beans as their main ingredient, while others opt for ground chickpeas. Falafel is a classic favorite in the Middle East, including Dubai, and you can buy it almost in every corner of the city, even in high-end restaurants. A sweet dumpling of the Arabs, luqaimat is a delicious dessert and snack. Its sweet sugary taste is popular among locals and tourists alike. It has a crunchy texture that melts in the mouth. If you are wondering how it is prepared, a luqaimat uses flour, milk powder, yeast, Noor oil, salt, and sugar. The sweet dough balls are then dipped into a syrup made from sugar, lemon juice, and water. It is simple yet an ultimate favorite of people with a sweet tooth. Make the most of your food crawl in Dubai by sampling delicious shawarma. Another dish that is sold in most parts of the world, the shawarma originated in the Middle East. Therefore, the locals sell the original version of it. Those who have tried shawarma know that it is like an Arabic sandwich, but instead of slices of bread, it uses a pita bread. The pita bread is then filled with marinated meat that has been cut into thin slices. This meat was slowly roasted for hours until it’s oozing with flavor. The most authentic shawarma is made with lamb, but these days, vendors have their own specialties, such as turkey, chicken, and even veal. If you want an ultimate Dubai food-trip experience, be sure to add madrooba in your long list of street food to try in the major Arabic city. The madrooba is probably one of the most famous street food in the city, and it can be bought in almost every corner, street, and eatery—and even at fancy restaurants. Also, it is always present during Dubai Food Festival and is even eaten during Ramadan. If you’re clueless what a madrooba is, it is a sweet delicacy that is made from Egyptian rice. It is cooked using a large wooden spoon for hours until it reaches a thick consistency. Stroll around downtown Dubai and buy a sumptuous samboosa as you explore the bustling area and immerse in the interesting local culture. The samboosa is one of India’s culinary influences on the Middle East. The Arabs adopted it and added their own twist. Usually eaten as a quick snack and comfort food, a samboosa is like the Spanish empanada—both are made from thin pastry coverings. Just like the empanada, it is filled with deep-fried ground beef. The only difference is that samboosa is made with herbs and spices that cater to the palate of Arabs. Your food trip in Dubai cannot be concluded without you trying out the palatable manakish. Originating in Lebanon, this snack may seem not so aesthetically pleasing, but its taste will surely bring you to heaven and back. Cooked in a huge oven, it is a flatbread delicacy that is topped with lots of cheese. For a twist, a manakish can contain various herbs, spices, and oils in contrast with the sweet-salty cheesy taste. Plus, meats and vegetables are included for added protein and flavor. People refer to harees as the Emirati porridge. It is extra popular during weddings, special occasions, and even Ramadans. Just like a traditional porridge, this savory dish is cooked in a pot. Ground wheat, salt, and a pinch of salt are mixed together to form the soup. For added ingredients and extra taste, meat is included in the mixture. This dish somehow resembles the Filipino arroz caldo and is also a fantastic snack in cold weather. A snack that is a favorite among the younger age bracket, Oman chips roll is a delicious Emirati snack that is worth a try. This snack can be bought almost anywhere in Dubai. Aside from the bustling streets and eateries, you can purchase it in groceries, hypermarkets, and even public places like schools and hospitals. If you have no idea what Oman chips roll is like, it is mostly a plain roll that is filled with tasty Oman chips crushed to bits. Liquid cheese is then added for a twist.

Dubai is definitely a major city that will treat you to some of life’s mundane pleasures. It is in every traveler’s bucket list and is guaranteed a must-visit at least once or twice in your life. Aside from upscale attractions and expensive activities, Dubai is a paradise for foodies. It offers authentic and palatable street food that, once tried, will surely make you come back to the Arab city. If you are planning to go on an adventure in Dubai any time soon, use this list as your guide in planning a food-crawl itinerary. 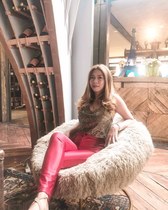 Explore Dubai
Good things are meant to be shared!