India, with all its offerings, is every bit a camaraderie of chaos and colours, which reflects in everything – its people, cultures, cities, attractions, and most of all, food. And, while you may want to explore several parts of the country, its sheer size and diversity may not always make it possible. Let’s start with New Delhi, the country’s melting pot and capital city, which sees millions of foreign travellers scattered on its streets, devouring the vibe. Karol Bagh is one of Central Delhi’s oldest neighbourhoods and while it may not be the locals’ first choice for trying food, the area packs quite a punch with the street food options you’d find there. Here are some of the best street foods you must try in Karol Bagh, New Delhi. Go on, eat your way through! What’s known as gol gappa in New Delhi goes by different names across India – pani puri in Maharashtra, puchka in Kolkata, and gup chup in Chattisgarh. Regardless, its essence remains the same, albeit some variations in flavour. Very simply, gol gappa is a crisp, gol (spherical) puri (puffed ball), which is cracked from the top and filled with flavoured water, which is most often available in sweet and spicy flavours. Fancier vendors even serve these with mineral water! You may choose to have the gol gappas filled with just the water or even go in for a potato or boiled chickpea filling. Each of the puffed balls need to be had in one go and can get quite a messy affair, so remember to keep a wad of napkins handy. Local legend funnily has it that there’s nothing more daunting than having one gol gappa in your mouth, one in your bowl/plate, and one ready in the vendor’s hand! Samosa is perhaps the most North Indian of street foods that you’d find. They have two parts to them – the dough pastry part, which is made of flour and the filling part, which ranges from a variety of foods (meats included). However, the most common of fillings is boiled and mashed potatoes, peppered with items such as dry fruits, green chilli, peas, and coriander. This filling is placed inside the dough and carefully handcrafted to an iconic triangular shape and deep-fried until a crispy brown. Samosas are best enjoyed with a sweet-spicy mint or tamarind chutney or even ketchup. They make an absolutely delicious (and filling) street snack, so do remember to try.

Moonglet is a fluffy pancake made from Moong dal batter mixed with some assorted vegetables like onions, capsicum, corn,...

With split mung beans as its primary ingredient, Moonglet is essentially a pancake made of grinding the lentil into a turmeric-infused batter, peppered with a variety of stuffs, such as green chillies, tomatoes, onions, etc. and then smearing and steaming the batter on to a pan like a pancake. Once done, Moonglet is light, fluffy, and completely satisfying. Couple it with some chutney or ketchup and you have yourself a winning duo. Oftentimes, vendors may choose to stuff the pancake with veggies or cottage cheese and serve it like a wrap.


Spicy, tangy, crunchy, and filling – is there anything else you’d want from a street food item? Kachori ticks all these boxes. It is very much an Indian equivalent of the Spanish empanada and sells like hotcakes. Ranging from a filling of lentils to potatoes to onions to just plain, kachori combines the best of flavour and texture. A lot of times, it is served with a potato curry, which makes for a perfect accompaniment. Chai kachori (tea with kachori) is probably one of the most loved Indian snack meals, so try yours also that way. Source: Photo by user Maskaravivek used under CC BY 4.0

Nothing gets more Punjabi (and Karol Bagh) than chole bhature, the ultimate breakfast food, which is very much a meal in itself. Usually accompanied by a spicy salad (of onions, radish, and carrots), green chutney, and whole green chillies, chole bhature is a winning combo of spicy chole, which are prepared by steaming chickpeas and preparing it into a curry with a host of spices, and bhature, which is a pillowy deep-fried dough bread. The vendors sometimes fill the bread with a bit of cottage cheese, which adds to its texture. Try a plate of this and you’ll fall in love with this Indian street snack. For those with a sensitive palate, pair it with a fizzy beverage of your choice. Throw in some boiled, mashed/grated potatoes, coriander, Indian spices, and any other veggie of your choice and you have yourself a firm, dough-like mixture that’ll need to be shaped like small, circular cakes and shallow-fried in oil – this is a gist of how aloo tikki is prepared. These crispy cakes are a Karol Bagh and North India favourite because of its tastiness and versatility. You can use aloo tikki as a patty and have it like a burger or smear a load of curd and other condiments and enjoy it like a chaat (a popular Indian hors d'oeuvre). Else, the tikki can be savoured as is with a variety of chutneys or ketchup. 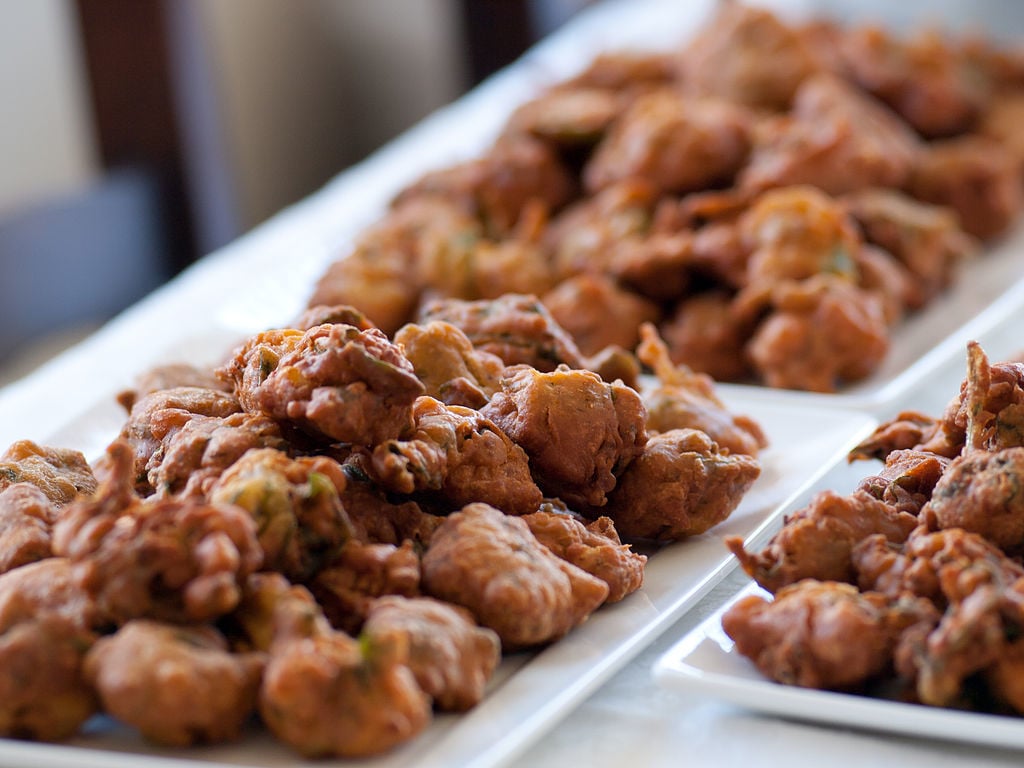 Pakoras are perhaps one of the most easily available and comforting of Indian street foods. They’re prepared by dipping any vegetable (or even meat filets sometimes) into a gram flour batter and then deep-fried until a brilliant golden-brown. The most common of them are onion pakoras, paneer (cottage cheese) pakoras, bread pakoras, mirchi (whole green chilly) pakoras, potato pakoras, and several others. Even though you can prepare pakoras with just about any fancy vegetable/meats, you’d find street vendors in Karol Bagh sticking to the most basic of vegetables mentioned above. Pakoras are the ultimate monsoon snack, best accompanied with a cup of tea. The name itself suggests what this street food snack is all about. Roasted chunks of juicy boneless chicken are placed on a bread, with a generous garnishing of salad and several sauces and condiments, and then wrapped into a roll. It is one of the most carry-friendly snacks and since is made (almost) from scratch each time, can be tailor-made according to your preference as well. Don’t like some veggies? Ditch them. Don’t want it too spicy? Avoid the spicy sauce. Want the roll with egg? Let the vendor know. There’s a world of choices with this one! One can’t leave behind desserts when it’s the Indian street food scene concerned and filling that gap is the hugely popular jalebi. Watching them being made is as much a delight as devouring them. You’d find halwais (confectioners) sit behind two large woks – one brimming with bubbling oil and one with an orange-coloured sugar syrup. The halwai draws out spiral-shaped lines of maida (white flour) batter in the scalding oil and leave them to fry until a light brown. The fried stacks of spirals are then transferred into the wok with the sugar syrup and left to soak for about 10 minutes. Once done, they’re served hot and are best enjoyed crisp. Relish these with a cup of warm milk or rabri (thickened sweetened milk) and send your senses into a world of gastronomical delight!


Kulfi is the kind of thing that would make you go weak in the knees. It is very much an Indian equivalent of the ice cream, but denser, creamier, and available in several different flavours and styles, such as matka kulfi (kulfi in an earthen pot), kesar pista kulfi (kulfi with saffron and pistachio), and malai kulfi (plain, cream kulfi), among others. Due to convenience, several flavours can now also be enjoyed as a popsicle (on a stick). Although, those of you sensitive to lactose may want to steer clear of this – it is prepared by slow-cooking milk and other ingredients until thick. Vendors may choose to garnish kulfi pieces with pomegranate pearls or dry fruits. You can always have it alongside falooda, which are starch vermicelli noodles.

Karol Bagh is a predominantly Punjabi neighbourhood, home to families that have lived in the city (and area) for several generations, and are engaged in ancestral businesses. No matter what time you head there, you’d find Karol Bagh bustling with people and blaring car horns ringing through your ears. Hustle on and find a way to shove aside the hordes of people there. In its chaotic alleys are hidden some of the best street foods you must try in Karol Bagh, New Delhi.