Phrae has been compared to the historical city of Luang Prabang in Laos. It’s full of greenery, wooden houses, and dominated with temples and monks that walk all over the district. It is also strategically located on the banks of the Mae Nam Yom. Phrae has a very low-key, rustic vibe, and is perfect for those who want a quiet, authentic experience of rural life.

The history of Phrae can be traced back to the Haripunchai kingdom of Mon. It is said that they were once ruled by brothers. One road in a horse, the other a buffalo. And that is why Phrae considers both animals sacred. Phrae also has a lot of sacred temples and chedis. If you want to see more of this part of Thailand, here are some of the things you can see in Phrae:

1. Celebrate with the people of Phrae at Phra That Chor Hae Festival

The Phra That Chor Hae Festival is a relatively new festival in Thailand. It was started by the Tourism Authority of Thailand and the Phrae Provincial Government. The festival was started in 2015, and was held at the end of February up to the start of March. The festival commemorates a sacred temple in the Phrae province of the same name. It is said to house the hair of Buddha.

The temple was made during the Sukhothai era. It is especially significant to people who were born in the year of the tiger. Praying in the temple helps bring good luck to you and family members. The festival usually holds grand parades with elephant rides and zodiac commemorations. Products and souvenirs are sold in the streets.

Tham Pha Nang Khoi is about 40 kilometers (25 miles) north of Lamphun, found on Highway No. 101 at Kilometer 59. Going down, you’ll be guided by a 50-meter (164 feet) long rail leading to the mouth of the cave. As you go along the cave, you’ll be met with winding tunnels and strangely shaped stalactites and stalagmites. The shapes are backlit with blue, red, and green lights that heighten the seemingly psychedelic experience inside the cave.

There is a Madonna and child at the end of the cave tour. There’s also a waiting woman, and just across, is a heart-shaped stalactite. Many locals interpret this as the legend of a lovelorn woman who waited for her lover until she turned into stone. What’s even more interesting about this cave is that there is a monk that still lives inside it. To make his living, he tells the fortune of those who visit during the day. Near the Tham Pha Nang Kho Cave is also a forested area. You can go to the Huai Rong Waterfall as a side trip.

3. Feel the love and longing at Phra That Phra Lo

Phra That Phra Lo is a 400-year old chedi that contains the remains of King Phra Lo, the ruler of Nakhon Maen Suang or Los Suang Man. It is said that he died and was buried along with his two lovers and sisters, Pra-Puean and Pra-Paeng. This is commemorated in funeral flames and memorialized every year. This folklore has been compared to Shakespeare’s Romeo and Juliet. Actors would play these torn lovers every year.

The temple itself is a small and compact chedi crowned by a golden dome. Others say it is actually the lost city of Los Suang Man of the Ayutthaya Period, which this temple is commemorating, but the masses seem to prefer the story about the lovers. The literature about it is still contestable. The temple is found in Tambong Ban Klang, on Highway No. 103, around 45 kilometers (27 miles) from Lamphun.

If you want to escape the busy city, head on to Wiang Kosai National Park. The park is shared by two districts, Wang Chin and Phrae. It also reaches other provinces such as Mae Tha, Thoen, and Sop Prap of Lampang. The park has the highest peak in Thailand, Doi Mae Tom, at 1,267 meters (4,156 feet) above sea level. The park also contains two famous waterfalls, Mae Koeng Luang and Mae Koeng Noi. It has one hot spring called Mae Chok. The park was set up as a reserve for Asian elephants. However, there has been very little sightings through the years. There are other animals though such as the Indian Muntjac, the tree shrew, and the Indochinese flying squirrel.

If you want to experience a bit of the supernatural, then head on to Phae Mueang Phi, also known as the Forest City of Ghosts or Spirit Grover. In truth, there is nothing quite spooky about it except that it has been considered sacred by local inhabitants because of so many stories of visitors getting lost.

It started when a local woman, a long time ago, came across some gold and silver which she took back to her house. The spirits took offense and made her go around in circles. When she placed the gold and silver on the ground, a path home eventually opened up for her. Geographically, the Phae Mueang Phi Forest Park is more famous for its mushroom rock formations.

How to get to Phrae

Phrae is a reasonably compact place, so you’ll find that it’s easy to go around the area. Getting to the area is a bit more complicated, as it takes a series of train and bus circuits. You can take a train to Den Chai and take a songthaew to Phrae. You can also take a bus to Chiang Mai from Bangkok first and then just take another bus from the Uttaradit bus station to Phrae. If you have the money, take the Nok Air plane from Bangkok Donmueang Airport.

Once you arrive, don’t forget our list for the best things to do during your visit to the beautiful and fascinating Phrae. 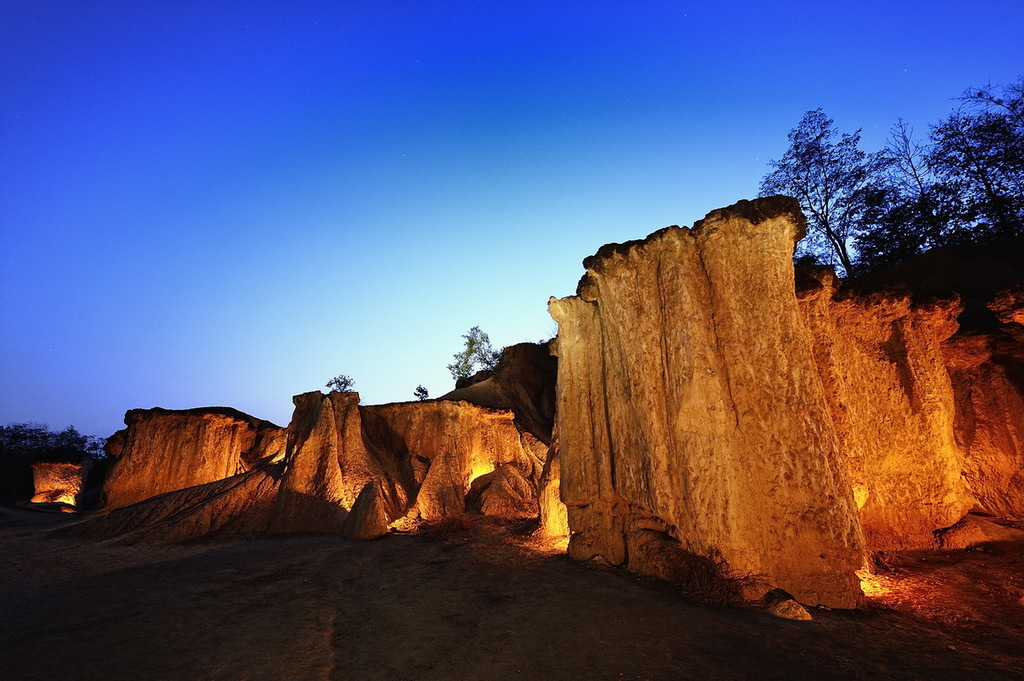 Explore Phrae (province)
Good things are meant to be shared!