South Goa is located in the Goa district of western India. Known for its pristine beaches, cerulean waters, and swaying palm trees, South Goa is the serene counterpart to its sister region, North Goa, which is famous (or infamous) for its wild, partying ways. South Goa is an elegant product of laidback, island hospitality, melded with historical Portuguese influences dating back to the 15th century. The Arabian Sea flanks South Goa, making it an ideal location for an exotic vacation in the tropics. South Goa is also diverse in its attractions, as the region has coastal lands, plateaus, and mountainous terrains. Read on for Trip101’s list of top things to do in South Goa and get cracking on your plans for a holiday in incredible India! South Goa is a place that is steeped in history and culture. In this personalised tour with a maximum of 15 visitors, Viator will bring you on an informative tour of the many museums of South Goa. Drop by the Chitra Goa Museum to explore South Goa’s people and traditions of years gone by. Peer through a miniature village with intricate details at the Bigfoot Cross Museum to experience rural Goan life.

Work your way through nearly 300 years of Indo-Portuguese art at the Christian Art Museum and pore over prehistoric and early to late medieval artifacts displayed proudly at the Museum of Archeological Survey of India. Your stomach will be taken care of, as well as your cultural aspirations, as a delicious traditional lunch is provided on this tour, as well.

Museums of South Goa with guide and lunch

Colva Beach is arguably the most famous beach in South Goa. Located in the equally picturesque Salcete Village, the beach is popular from dawn to dusk. Visitors can partake in a number of water sports here, such as snorkelling, parasailing, and jet skiing, or simply lay out on the clean, white sand for a tan. The waters of Colva Beach are crystal clear, making them a joy to swim in. The beachfront is also lined with many food establishments during the day and bars that add to the vibrant nightlife scene. With Viator’s curated tours, you can be sure that the tour group is kept small with a maximum of nine people, letting you enjoy sightseeing in beautiful South Goa in peace. This tour of ancestral Goa will take you through the centuries of culture and traditions that shaped South Goa, from a museum visit in Loutolim Village to a lavish 250-year-old Portugese mansion called Casa Araujo and finally to a private tasting session of feni, which is a local liquor brewed from Goan produce, like cashew nuts and coconuts.

Along the way, you will be taken to two very impressive temples in South Goa, the Mangueshi Temple and Shantadurga Temple, both with stunning architecture that dates back to the 16th and 17th century respectively. Tuck into a sumptuous lunch at a quaint spice village before heading back to your hotel in the evening.

Cabo de Rama is a historic fort in South Goa that has been claimed by generations of Indian rulers and Portuguese occupiers. The ruins of this strategically placed fort perch atop a cliff on Cabo de Rama Beach, with sweeping views of the Arabian Sea. To get to the fort, scale the hill from the beach and cross a bridge that has stood the ravages of time for over three centuries.

The Naval Aviation Museum was started to trace the history of Indian naval aviation, from its modest roots as a 10-plane fleet to its present-day strength of over 400 warships and aircraft. The Naval Aviation Museum showcases a range of aircraft, from vintage seaplanes to the historic Super Constellation aircraft, which enabled the Indian Navy to step up its maritime patrol duties. Today, the museum has 15 different types of aircraft under its wing.

Casa Araujo Alvares belongs to the Alvares family and was opened to the public so that the golden years of Goan life can be preserved for generations to come. The 250-year-old mansion is done up in a mixture of architectural styles, which take influence from Portuguese and European design, as well as Goan elements. Each room in the mansion is equipped with a light and sound show, complete with commentary, which creates an immersive experience for visitors wishing to gain some insight into the lives of the Goan-Portuguese families of the past.

Unexpectedly, the Three Kings Chapel is a well-known destination in South Goa for thrill seekers and paranormal hunters! It earned its reputation as one of the top most haunted attractions in the region, due to the grisly story of its name. According to legend, a subterfuge concocted by a power-hungry king to eliminate his equally ambitious competitors, led to the death of all three. To this day, locals report strange sounds from the chapel after dark!


The Abyss Marine Fish Aquarium is a popular spot for locals and visitors alike who are drawn to the colourful marine animals housed within the building. Besides the main (and biggest) tank, which showcases a wide variety of fish and sea creatures from the Arabian Sea, the Abyss Marine Fish Aquarium also has a number of smaller tanks, where visitors can interact with selected marine life, such as starfish and sea cucumbers. The aquarium is also part museum, as it depicts the traditional fishing lifestyles of the fisher-folk of Goa.

The Bhagwan Mahavir Wildlife Sanctuary is the largest wildlife nature reserve in Goa and home to nearly 1,000 species of flower and fauna, in addition to the various animals and insects native to the region. The sanctuary is home to endangered species, like tigers and snakes like the King Cobra. Besides looking out for these animals, visitors can also complete hiking trails that will take them to the famed Dudhsagar Waterfall, Tambdi Falls, Devil’s Canyon, and beautifully preserved Kadamba dynasty-era temples. Visit Dudhsagar Waterfall – one of the most famous sights in South Goa – with a small and intimate group tour led by Viator! The Dudhsagar Waterfall is hidden within Mollem National Park and falls from a height of more than 1,000 feet (304.8 meters). Standing at the foot of the falls, you will be buffeted by the strong, clean wind of the waterfall that it creates with its sheer power.

After a jungle safari tour, which your English-speaking guide will take you on, learn more about the hundreds of spices commonly used in South Goa with a trip to a spice plantation. You will get a taste of these spices through a traditional Goan meal, prepared and served on the spice plantation. Next, make a stop in Old Goa and marvel at the architecture of this traditional town.

Feed your mind, soul, and body in South Goa

As you can see, South Goa is not just a destination for sun, sand, and sea. The region has a deeply rooted history that makes it a melting pot of cultures that extend to its food, attractions, and traditions. With Trip101’s list of things to do in South Goa, make the most of your vacation in South Asia to learn about how life can be different, yet still amazing across the globe. May you come back from South Goa with a happy belly and wonderful memories of all that this beautiful region has to offer! 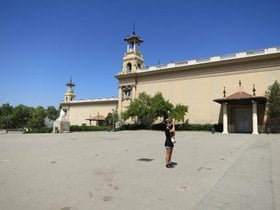 Explore South Goa
Good things are meant to be shared!