13 Best Things To Do In Songkhla, Thailand

Growing up I always dreamed of going backpacking through Europe and then exploring South East Asia in a huge post-college graduation adventure. It would be the last time that (for a while) where I would have almost an entire summer with no responsibilities and no commitments. While I’ve hit a small snag in this plan, it doesn’t mean I can’t continue to dream up the wonderful places I’ll visit and cultures I’ll explore.

One of the most popular destinations nowadays is Thailand, and it’s quite easy to see why. They have delicious food, sparkling beaches, and almost any city (even the tourist-heavy ones) will give you a rich slice of Thai culture that you’ll never forget. So while many of us will inevitably include major cities like Bangkok and Chiang Mai in our itineraries, I urge you to include some of Thailand’s smaller (yet equally precious) gems - Songkhla.

Songkhla is the capital of the Songkhla Province in Southern Thailand. The city is surrounded by beaches and is often called “the great city on two seas”. A visit to Songkhla will transport you to another world - one that you won’t want to leave. So, to narrow down or at least give you a starting point for your sightseeing, check out some of the coolest spots in Songkhla.

1. Learn about the Golden Mermaid 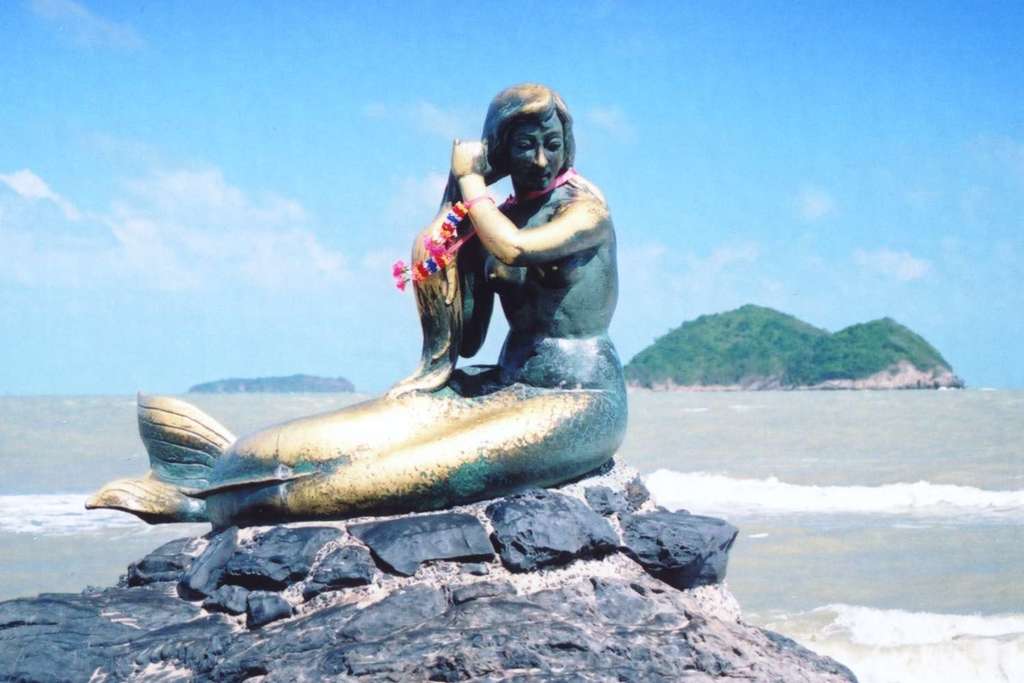 The Golden Mermaid lounges on some rocks on Samila beach just waiting for her fisherman to return her comb. The mermaid statue was inspired by a saga about a mermaid who combed her hair with a golden comb (kind of like Ariel but also not because this mermaid uses a golden comb and not a fork). Well one day a young fisherman came upon her and it was love at first sight - for him. The mermaid was startled and returned to the ocean, but left her golden comb. The fisherman found the comb and waited every day for her to come back for it, but she never did. Now the Songkhla mermaid is an ode to the story and if you want some good luck in the relationship department, you should rub the mermaid’s hair.**

**I may or may not have made the part about good luck up…but it still makes for a great Insta shot.

2. Walk across Thailand's longest concrete bridge to Ko Yo Island

Ko Yo Island is on the Eastern side of Songkhla Lake and easily accessible by Thailand’s longest concrete bridge, Tinsulanond Bridge. A trip to Ko Yo is definitely not to be missed, as Ko Yo is known for its amazing and extremely fresh foods, including Jampada and Spicy Catfish, which you can enjoy sitting at a waterfront restaurant like Khun Jit Sea View or Rai Thong. Aside from food, Ko Yo also features various museums and temples and a reclining Buddha (see point 6 below).

Posted by SyiokTravel on Wednesday, 16 December 2015

Because I’m definitely not talented enough to make one. But you can practice your calls and spot hundreds of exotic birds at the Thale Noi Waterbird Park. You’ll be able to take a motorboat out into the lake, filled with waterlilies and lotus flowers, and just enjoy the serenity of nature and birds.

Opening Hours: 8 am - 5 pm (But it’s best to go earlier in the day before it gets really hot)

Tang Kuan translates to Monkey in Thai - so now’s your chance to trek to the top of “Monkey Hill” (there is an elevator for those who are unable to climb, so don’t worry everyone can take part in this activity). The top of Tang Kuan Hill will give you a panoramic view of the entire city. You can see the city sprawling beneath you and the ocean just beyond that - it’s truly breathtaking. Additionally, at the top of the hill you can also visit Dvaravati Chedi Tower, which houses Buddha relics.

5. Try not to get eaten by the Dragon Head Statue 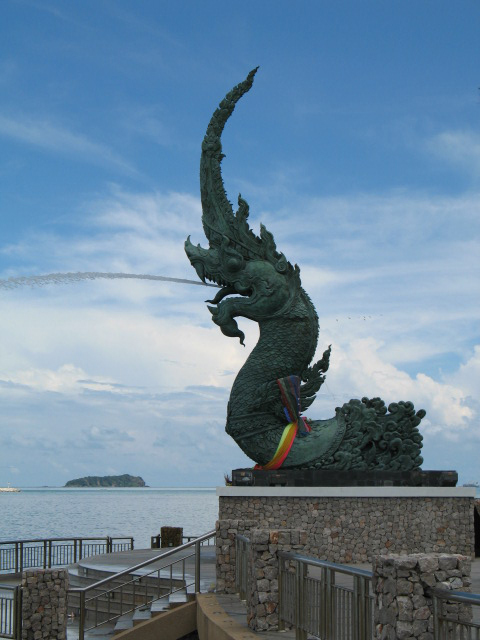 So there isn’t actually a threat of being eaten, but you may get sprayed - with water, not fire. The famous Naga Head statue at Song Thale Park was built in 2007, and as such is relatively new to the Songkhla culture. However, its newness hasn’t slowed visitors down, probably due to its unique construction. The dragon head, body, and tail are all found in different locations along Songkhla Lake. The head is by the entrance, the body by the park, and the tail is along the side.

6. Lay down next to a reclining Buddha Statue 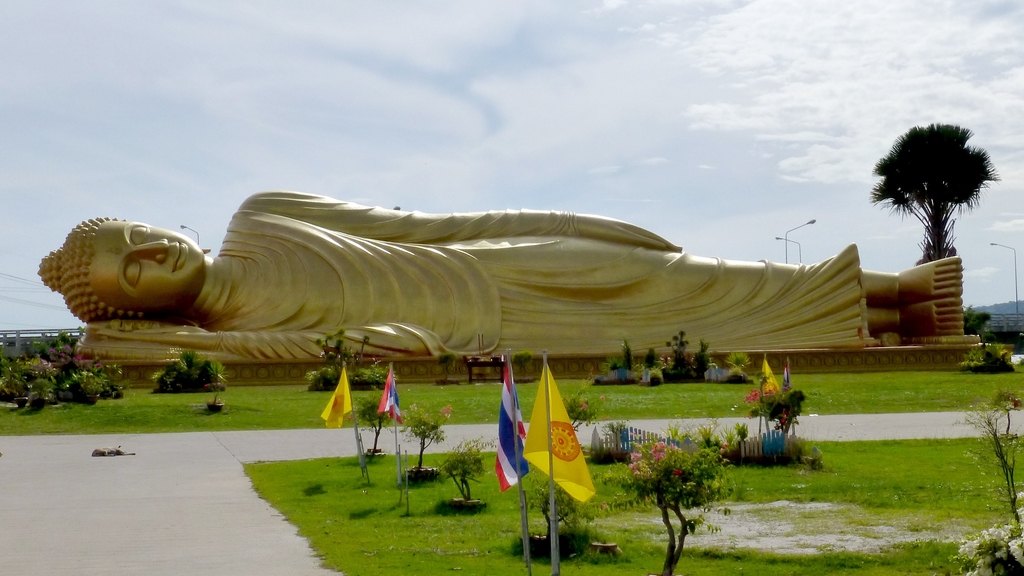 You can find the Reclining Buddha as you enter the south side of Ko Yo Island. The Reclining Buddha is a part of Wat Phranon Laem Pho (a Buddhist temple) and just sits (lays?) there in all its gilded spectacular-ness. While it may serve as a popular tourist attraction, many of the locals also visit the temple for regular prayer (so it’s truly an authentic experience).

7. Shop around in the City Pillar

The City Pillar of Songkhla, built around the same time as Songkhla’s founding, is in a Chinese-style building; the shrine itself is also clearly influenced by the city’s Chinese origins. The City Pillar is situated on Nag Ngam Road, which is the heart of local Thai food. You can also shop around on Nag Ngam Road for souvenirs and taste the infamous Thai dessert - Khao Too.

Most of the time outdoor markets are only open during the day, but the Songkhla Tae Raek is specifically a night market. You can find this market across from the National Museum of Songkhla and is a great place to get a bite to eat and enjoy the local flavor. After dinner, you can continue to walk around the market and admire (and buy, if you’re like me) anything from the dozens upon dozens of stalls featuring clothing, trinkets, spices, jewelry and more!

Khao Kao Seng is one of the most stunning beaches you’ll ever visit. If the glittering ocean wasn’t enough to captivate your interest, the boulders that are spotted around the coastline may convince you. The Hua Nai Raeng Boulder is particularly noteworthy. The legend says that the boulder is actually the head of Nai Raeng, as a punishment for not completing an important task. His head was to be placed on top of the gold and other treasures, so many people believe that below the boulder lies hidden treasure (boulder marks the spot).

Full Legend Legend has it that there was a large boy born in Southern Thailand and because of his size, his parents named him Nai Raeng (raeng translates to strength, energy, or power). While the boy was extremely strong, he also had an appetite to match - eating enough for 10 men instead of just one. His appetite forced his parents to send him away, as they were unable to support his diet. However, the ship he found work on was also unhappy with the amount of food Nai Raeng consumed, and so abandoned him in the ocean. Nai Raeng was strong enough to swim to shore and eventually found his way back home. He found a new job and was able to support his parents and soon became governor of Songkhla. One day, there was to be a festival to honor the placement of some of Lord Buddha’s bones in a nearby temple. Nai Raeng was to bring all the money and gifts sent to him to the temple in time for the festival. Nai Raeng was more than honored to do so and was actually going to donate nearly 1 million Baht in gold. But, on his way to the festival a large storm came in crashed Nai Raeng’s boat into some rocks in the South. He was too far away to fix the boat in time for the festival. He was extremely upset over his failure to deliver, and as such ordered his men to carry the gold onto the beach and bury it somewhere safe. Then he ordered his men decapitate him and place his head above the gold, which ended his honest and good life.

Posted by Richard Barrow in Thailand on Friday, 15 May 2015

The Songkhla Zoo is an open-range zoo with the primary goal of nature preservation and conservation. Tourists can drive around the zoo and see a variety of animals including but not limited to camels, birds, tigers, and bantengs. The zoo also features a waterpark, and several shows with tigers, penguins and even the “survival of wildlife”.

Go on an adventure and immerse yourself in nature as you explore Namtok Ton Nga Chang. This waterfall has seven levels and you can climb to different levels with little or no need for equipment, thus perfect for those who do not have training or waterfall climbing experience. On the third level, the stream splits into two, while the water on the waterfall basin is crystal clear and flows into the Songkhla Lake. So if you are longing to be showered with fresh water, and to climb up the mountains, then visit Namtok Ton Nga Chang. This place will undoubtedly give you a full-blown adventure.

This shopping haven is good for a night out to feel the heartbeat of the town as both locals and foreigners flock here. With approximately 100 stalls offering different kinds of products from clothes, bags, watches, accessories, decorations, kids’ toys, and even paintings, this marketplace definitely has something for everybody. Offering various cheap products, you may shop all you want without hurting your budget. Moreover, you can haggle to get discounts, thus allowing you to return home with plenty of souvenirs to bring. Don’t worry about getting hungry while shopping because you’re still in the right place. This market also sells food and drinks that you can enjoy while buying your good finds. This place is definitely worth a visit during your stay in Songkhla.

Source: Photo by user Anomonny used under CC BY 3.0

Wondering if going up the mountain without trekking is possible? Then try Hat Yai Cable Car, the first cable car in Thailand. It offers a convenient way to climb up the mountains without sweating out. During your swift ride, you will see spectacular views of Hat Yai city. Highlights included in this place are Hat Yai Ice Dome, where ice sculptures created by high-skilled sculptors from Harbin City in China are exhibited. Then, there’s also Hat Yai Science and Astronomy Center (Astronomical Observatory) where you can discover more about astronomy by looking at its technological tools and equipment including exhibition rooms, cinema rooms, and an observatory.

Just because you’re visiting Thailand doesn’t mean you shouldn’t take the time to visit some of the smaller towns in the country. Cities like Songkhla are tourist-friendly, less crowded, and still give you that immersive cultural experience you’re looking for. So next time you’re planning a visit to Thailand (or anywhere else) take a step back and then dive a bit deeper, because you may never know what kind of treasure you’ll find.

Kavita is an avid traveler, enthusiastic foodie, and aspiring Instagrammer, whose life goal is to renew her passport because she’s maxed out her stamp pages. Kavita’s wanderlust started from a...Read more
Want to contribute as a Local Expert?
Register Here
Hotels
Lowest Price Guarantee

Explore Songkhla (province)
Good things are meant to be shared!