What Is Shikoku Pilgrimage? Explore Japan’s Own Camino de Santiago!

The two major religions in Japan are Buddhism and Shinto, with Buddhism imported since the 6th century via China and Korea and the Shinto as old as the Japanese culture. While most Japanese are not too religious in their daily lives today, the Shikoku Pilgrimage (四国遍路) remains a distinctive cultural tradition in the country. Nowadays, it not only attracts the traditional pilgrims but also more and more young people who are interested in boosting their fitness or spiritual energy through the route.

Useful information about the Shikoku Pilgrimage The Shikoku Pilgrimage is an 88-temple pilgrimage associated with the Buddhist monk Kūkai (Kōbō Daishi) in the small Shikoku island, located south of Japan mainland and east of Kyushu island. It is believed that Kōbō Daishi, the founder of Shingon Buddhism in Japan, established or visited many of these temples so this route follows his footsteps. Traditionally, the pilgrimage is completed on foot, but with modern-day transportation, pilgrims (known as “henro”) today also make use of cars, buses, bicycles, and more to complete the course. Approximately 1,200 kilometres (750 miles) long, the standard walking course will take up to 60 days to complete.

Shikoku means “four provinces” on the island, which are the present-day Tokushima, Kochi, Ehime and Kagawa prefectures. The pilgrimage journey through these four provinces is likened to a symbolic path to enlightenment, with each province representing a different stage. Starting from temples 1 to 23 and 66 in Tokushima prefecture, this is where you experience spiritual awakening. Move to temples 24 to 39 in Kochi prefecture for austerity and discipline. Next, in Ehime prefecture, temples 40 to 65 signifies enlightenment, and finally you enter the stage of nirvana at temples 67 to 88 in Kagawa prefecture.

Traditionally, the henro will wear a white shirt, Sugekasa (conical woven hat), Kongozue (wooden walking stick that symbolises Kobo Daishi walking together with you) and Wagesa (simplified version of priest’s outfit). In addition, the henro’s bag will likely contain Osame fuda (name slips to place in the temple after worship), prayer beads and incense sticks. The locals address the pilgrims as “o-henro-san” and will offer them osettai, or donations, in the form of money, candy and fruit.

Interestingly, to complete the pilgrimage, it is not a must to visit the temples in order. In fact, you can also choose to visit in the reverse order, although that may be tougher as the path markers have been created to direct in the ascending order. Do the reverse visit when you are more familiar with the route to challenge yourself. You also do not need to visit all the 88 temples at one go. Keen to embark on this spiritual enlightening tour but feel overwhelmed by the sheer number of temples in this pilgrimage? Let this article guide you to the more noteworthy temples that you should visit in Shikoku!

Most henros begin their journey from temple 1, Ryozen-ji (りょうぜんじ, 霊山寺) because this is the temple closest to Koyasan, the headquarters of Shingon Buddhism. In the year 815, Kobo Daishi visited Ryozen-ji and stayed for 37 days. The Honzon, or principal image in the temple is a carving of his works as he had a vision of Shaka Nyorai preaching the Lotus Sutra on Ryojusan then. As this is the starting point of the Sacred 88 Shikoku Pilgrimage Sites, there is a store here where you can purchase the necessary kit such as white robes, walking sticks and woven hats.

Access: 30 to 45-minute train ride from Naruto Station to Ikenotani Station then transfer to Bando Station (260 JPY / 2.50 USD, covered by Japan Rail Pass). From Bando Station, the walk to temple is about 10 minutes. The trail from temples 1 to 10 is generally easy to follow and not too strenuous for first timers. However, as you move from temple 11 - Fuji-dera (ふじいでら, 藤井寺) to temple 12 - Shozanji (しょうさんじ, 焼山寺), you will experience the toughest part of the pilgrimage. This 13-kilometre (8-mile) Henro Korogashi, which means “pilgrims fall down”, comprises of steep hills and valleys that you have to make your way through. Along the way, there are no restaurants or vending machines, only the washroom next to the rest areas. So make sure you have some refreshments along with you to keep you hydrated and energised. Nonetheless, immerse yourself fully in the pure beauty of springs, ancient Japanese cedar trees and shrines along this ancient trail.

While it is a notoriously difficult trail, you should still try walking this course so as to fully appreciate a true training pilgrimage that Kobo Daishi took on more than 1,200 years ago! Furthermore, the sense of achievement upon reaching Shozanji at a height of 1,067 metres (3,500 feet) is tremendous. Of course, you will also be rewarded with an amazing view at this first mountain temple on the 88-temple circuit.

Access: Take route 438 from JR Tokushima Station to Kamiyama-cho district. Turn right at the Josai Kamiyama High School next to the grocery store and cross the bridge to the mountains. Like Shozanji, Konomineji (こうのみねじ, 神峯寺) is located on a mountain, 427 metres (1,400 feet) above sea level. Because of the relatively remote locations, temples on the mountains are often referred to as nansho temple (difficult place). Enjoy the scenic coastline views as you ascend up the mountain to Konomineji through the woods with cherry and azalea blossoms.

Access: Walk for about 1 hour 30 minutes from Tang Yokohama station Modelled after Mount Wutai in China, temple 31 Chikurinji (ちくりんじ, 竹林寺) is the most famous temple in Kochi. Built on a small mountain to the east of Kochi’s downtown, it was founded by a Buddhist priest, Gyoki, in the year 729. The honzon in Chikurinji is Monju Bosatsu, hence the temple is also known affectionately to the locals as Monju-sama. Kobo Daishi received his training at this temple and it prospered during the Edo period under Tosa Domain.

The temple grounds feature an interesting array of halls and structures, a beautiful five-storied pagoda at the summit, and 17 Buddhist statues designated as National Important Cultural Properties. A treasure hall displays several Buddhist statues and scrolls of significance to the temple. There is also a garden which you can enjoy the beauty of different seasons.

Price: Free admission to the temple grounds, 400 JPY (3.90 USD) to the treasure hall and garden

Access: 25-minute My-Yu bus ride from JR Kochi Station to Chikurinji-mae bus stop (600 JPY / 5.90 USD for a day pass of unlimited rides between Kochi Station and Godaisan), followed by a 3-minute walk to the temple. Located in Matsuyama city in the Ehime prefecture, temple 51 Ishiteji (いしてじ, 石手寺) is the city’s most reputable temple. Besides, Ishiteji is also close to the famous Dogo Onsen to the northeast of Matsuyama’s city centre. According to legend, the temple was so-named because of an aristocrat who looked for Kobo Daishi but did not get to see him till his death. He had held a stone tightly in his hand on his deathbed, and was later reborn with the stone still held in the baby’s hand.

Compared to other temples on the Shikoku Pilgrimage, Ishiteji is a large temple complex with several halls and temple buildings, a three-storied pagoda and various statues. The architecture style here is typical of the Kamakura Period. Behind the hondo (main hall), enter the dimly-lit 200-metre (656-feet) cave with many Buddhist statues, carvings and drawings. You will find a large, golden dome-shaped hall, a unique inner temple entirely different from the main temple grounds. Marvel at the huge statue of Kobo Daishi standing atop the forested hill above the temple.

Price: Free admission to the temple grounds, 200 JPY (2 USD) to the treasure house

Opening Hours: Always open for temple grounds. 8 am to 5 pm for treasure house. 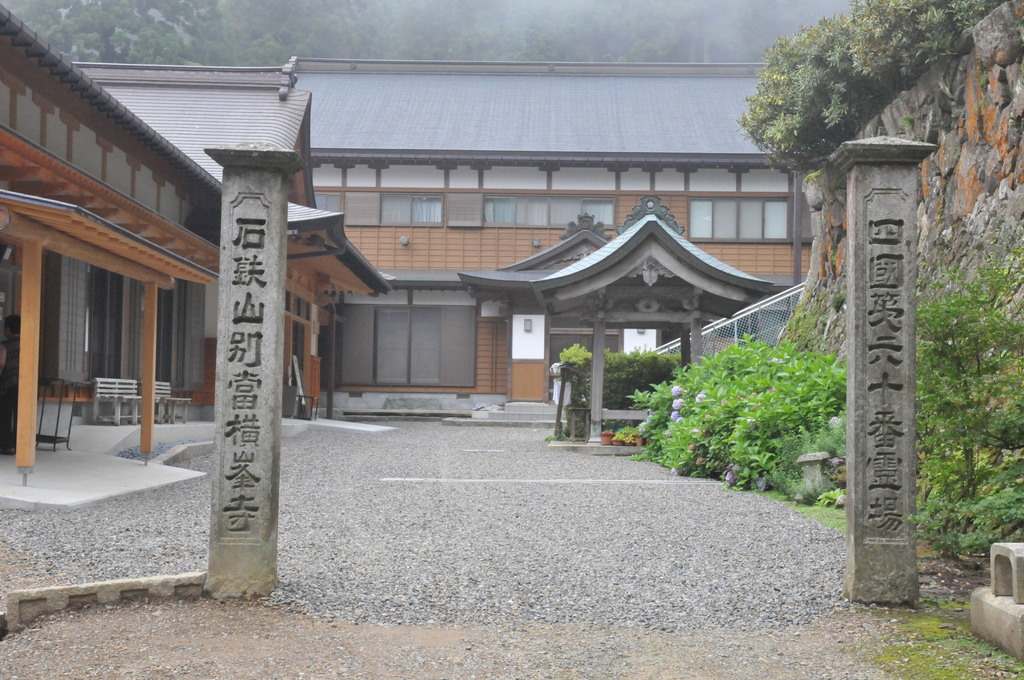 Temple 60, Yokomineji (よこみねじ, 横峰寺), is another nansho temple on the Shikoku henro route. Situated on one of the lower 750-metre (2461-foot) peaks of Mount Ishizuchi, the hike up Yokomineji is winding and steep, through lush forest full of towering trees and streams. Indeed, this is a challenging stretch with several warnings of falling rocks, loose rocks and slippery surfaces before you reach the temple for enlightenment. Train your endurance level as you reflect on the training pilgrimage that Kobo Daishi and many others went through centuries ago. Recharge yourself with a breather upon arrival at the sacred mountain temple, Yokomineji. The walk to the next temple - Kouonji (こうおんじ, 香園寺) will be much easier and a refreshing change as you descend downhill. As the last temple of the Shikoku henro circuit, Okuboji (おおくぼじ, 大窪寺) is located at the base of Mount Nyotai. Besides being the last leg of the pilgrimage journey, Okuboji is also a popular autumn foliage viewing spot because of the famous ginko and numerous maple trees. The hondo and two-storied pagoda offer reverent silence for worshippers. Interestingly, the temple bell and pilgrim bells have been selected by the Ministry of the Environment as one of the 100 Best Soundscapes of Japan.

Founded in the year 717 by Gyogi Bosatsu, it was later rebuilt by Kobo Daishi when he carved the honzon and enshrined it here with his Shakujo (walking stick with large metal rings attached to the top of the handle in order to make rattling sounds). You will see many Kongozue in the temple, left behind by pilgrims who have successfully completed their pilgrimage as a sign of gratitude to Kobo Daishi. Do note that your real last stop should be back to the temple where you began the long spiritual journey.

Challenge yourself for an unconventional tour in Japan The Shikoku Pilgrimage is a Buddhist pilgrimage, but it doesn’t mean you can’t join in if you aren’t a Buddhist. It is open to everyone, regardless of nationality, ethnicity or religious background. Rather than doing the conventional tourist route in the Land of the Rising Sun, why not put your body and mind through the physical and spiritual challenge? Who knows, this novel way of exploring the Shikoku island may prove to be a life-changing one for you. Experience the warmth and extent of Japanese hospitality through this unconventional journey!

Explore shikoku
Good things are meant to be shared!