Vienna Imperial Furniture Museum exhibits one of the most important and extensive collections of furniture and personal objects in the world. The showpieces are mostly related to royal families of the Austrian, and later Austro-Hungarian, spanning the period of a few last centuries. Exhibits were collected from various official government buildings and countryside residences, and visitors can see a wide range of furniture and home items here, from the royal throne to the spittoon. Additionally, the display of objects is accompanied with reconstructions of the emperors’ and empresses’ favourite chambers and information panels on the trends related to the different periods.

Display of the throne room Detailed information guides the visitors even through the history of the royal court, which highlights the symbolism linked to the related objects. Such objects, which were used during official and state events, were clearly meant to underline a divine nature of the Emperor’s or the Empress’s right to reign. Other objects are more ordinary, or rather inconspicuous, but only at the first glance, and bespoke volumes about quite an ordinary life of certain personalities and their true nature once they retreated into the solitude of their private chambers, away from the ever-watchful eyes of the court.

Dedication to the religion was an important daily routine 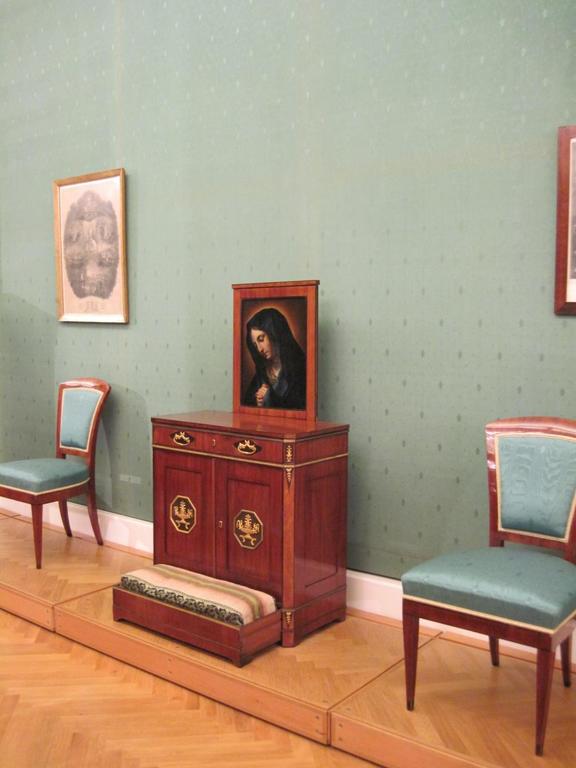 Further reconstructions of the private chambers of the members of the royal family give us numerous opportunities to make our own discoveries of how they preferred to spend their leisure time and which activities were their favourite; whether those included hunting, socializing, self-employment through art, or something else. The chamber of Maximilian I, Franz Joseph’s brother, reveals his passion for hunting and competing. Aside from reconstructed official and private apartments, the museum disposes of the amazing collection of stylish and austere (only by the royal standards) chandeliers, candlesticks, mirrors, dressers, chests, tables and more. Some of those items were transferred from one location to another on the occasion, which required thorough preparations to ensure the preservation of an object during a journey. History and art enthusiasts will receive an additional value through the tour since the exhibits are accompanied by various portraits and busts of significant personalities, even a wax figure representing the Empress Elisabeth, Franz Joseph’s beautiful wife. The family trees of separate branches of the house of Hapsburg are also attached. Imperial Furniture Museum is easily accessible. The Imperial Furniture Museum is somewhat sidelined from the established tourist paths in Vienna, but is easily accessible either by U3 metro line (station Zieglergasse – direction Ottakring from the centre of Vienna) or 13A bus line (Neubaugasse station). The museum’s address is Andreasgasse 7.

For a quick tour of this interesting museum, two hours should suffice, but it would be great if you could allocate twice that time in order to make the most of its magnificent collection.