Swayambhunath is among the oldest religious sites in Nepal and one of the most sacred Buddhist pilgrimage sites in the world. It was said to be founded by the great grandfather of King Manadeva during the 5th century after damaged stone inscriptions related to King Manadeva were found on site.

Although it is primarily a Buddhist temple, many Hindu monarch followers also paid homage to the temple. One of the kings of Kathmandu, Pratap Malia who is also a Hindu follower, was responsible for the construction of the eastern stairway during the 17th century. This goes to show how much influence the temple has shown in the past.

For those who are seeking for better luck or direction in your life, this is the perfect chance for you to do it the Nepali way. Photographers are also in for a steal as photo-taking is allowed in most parts of the temple. There are many ancient artifacts with a rich history and troops of holy monkeys roaming around the temple. The Nepali people are very interactive as well so it is a good chance for a culture exchange session and get to know each other better. The temple is richly filled with Buddhist sculptures and symbolism surrounding the famous stupa (a Buddhist dome-like structure) with the Buddha’s eyes tower. However, it is a temple that is built on the top of Kathmandu Valley so for those who have motion sickness or low stamina, this can be a little challenging for you.

One can either reach the temple by taking a drive along the rough roads from the south to the west of Kathmandu Valley to climb the shorter flight of stairs or climb the long stairway with 365 steps from the east of the valley. The long stairway is actually considered sacred and is the only route that pilgrims will take to reach the temple. Therefore, if you are looking for a more memorable and authentic experience, perhaps this is the path you may want to consider but make sure you do your fitness training before taking on this path. No matter which path you take, you will be rewarded with an exotic experience of being surrounded by the oldest architectures in the world. Going a little further up to the top of the temple will lead you to a panoramic view of Thamel. The stupa is definitely the most outstanding part of the temple and it is declared a World Heritage Site by UNESCO. With four pairs of the Buddha’s eyes painted on each side of the golden square tower, you will never fail to receive a holy yet majestic aura under it.

The eyes of the Buddha may give the tourists a sleepy impression but they are known to represent Compassion and Wisdom. Between the two eyebrows is a third eye and according to the legend, it is said that it will emanate a cosmic ray to send messages to humans who are interested to hear the Buddha’s preachings. Above the eyes on all the sides are five Buddha structures known as the Five Dhyani Buddhas and each of them represents different cosmic elements. The spire is made up of thirteen golden disks, which represent the thirteen steps to enlightenment according to Buddhist teachings. Above all stands an umbrella which represents enlightenment itself. Most of the other sculptures in the temple have been donated by kings and monks of the past and it is surprising to see that most of them are still intact even after over 2000 years. In fact, you are able to find other renowned sacred temples within Swayambhunath such as the Harati Devi Temple and the Shantipur Temple. All of them have their own history and are very popular among the locals for religious reasons. Since Swayambhunath is a Buddhist temple with Tibetan Buddhism influences, you would expect to see prayer wheels and flags in the temple. The prayer wheels are a tradition in all Tibetan Buddhist temples. They are known for purifying negativities in one’s life and to accumulate wisdom and merit by spinning the wheels in the right order. Therefore, they are very popular among tourists who spin it for good luck and blessings.

The prayer flags usually come in five colours (blue, white, red, green and yellow) and they are arranged in a specific order. Each of the colours represents different elements and unlike the prayer wheels, they are not created for the purpose of attaining good karma. Traditionally, they are used to promote peace, compassion, strength and wisdom. The reason why they are usually displayed outdoors is because it is believed that the meaning behind the flags will be spread by the wind to spread the good will for the benefits of all.

There are small stalls that sell Buddhist ornaments including these flags and wheels as a token of blessing, which makes for a memorable souvenir. Do check them out at the shorter stairway.

The monkeys of Swayambhunath Swayambhunath Temple is also known as The Monkey Temple and some tourists are attracted to the temple not because of the religion and historic content but to see the monkeys. Most of them roam around the southwestern part of the temple. In fact, these monkeys are not to be taken lightly.

The monkeys in Swayambhunath are considered holy and are treated with respect from the locals. According to legend, Manjushri, the Bodhisattva of wisdom was supposed to keep his hair short but he kept it long. Head lice subsequently developed in his hair and it was said that the first generation of these monkeys were born from the head lice.

These monkeys are after all wild monkeys and they come in contact with humans every single day. Therefore, they are not afraid of humans and will not shun away once they see you. They are social creatures and hang out in groups to look for food and to groom one another. Some of them are so brave that they will even approach to steal your belongings!

There are still some vendors that sell food for the monkeys to tourists. This provides an opportunity to be as close as possible to the monkeys and will definitely be an unforgettable experience for you. So, feel free to try it at your own risk.

Whatever your impression of the monkeys will be, it must be understood that they are wild monkeys and they do behave like one. Thoughts of them to be tame and obedient should not even be considered. They must be respected and if you are able to keep your belongings in one backpack, that should help to prevent any loss of items.

Things to take note of The entrance fee to the temple costs only about 200 NPR (1.90 USD) per person, which is really affordable. Since there is no railway system around Kathmandu, the only way to reach here is to grab a taxi and stop at either entrance. It should be a 10-15 min ride from Thamel area. The average price should be around 100 NPR (0.96 USD)

The people of Nepal are generally nice and helpful. However, it is a very poor country where beggars and pickpockets are common and persistent. Some of them do roam around outside the temple so it is of utmost importance to not reveal the amount of cash you have on hand and watch out for your belongings at all times.

It is not advisable to go in the night, as you may not be able to see a panoramic view of Thamel if there is a blackout in the town. Blackouts are common in Nepal because this is a way for the nation to preserve electricity.

As this is a highly respected place of religion, please respect the environment and everyone around you. Do not litter the place and behave yourselves.

For the knowledge junkie

As Swayambhunath is a place filled with rich history and if you want to know more about it, it is best to book a guide before arriving in Nepal. It is also possible to book a guide in Kathmandu, as there are lots of tour and trekking agencies that provide such a service. 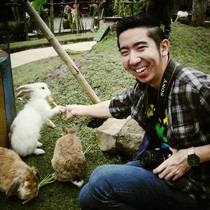 Cleve is a travel enthusiast who seeks out the non-conventional in most of his trips. Passionate in sharing the beauty of exotic cultures and attractions, Cleve has been constantly researching...Read more
Want to contribute as a Local Expert?
Register Here
Hotels
Lowest Price Guarantee