See The Unforgettable And Full Of History Topography Of Terror, Berlin

The Topography of Terror Documentation Center, located at Niederkirchnerstraße 8, 10963 Berlin, Germany, is a historical site and museum that provides a detailed account on the horrific atrocities committed by the Nazi Party from 1933 up until 1945. I would recommend that you visit this location, not because it is free, but because you will have an eye-opening educational and emotive experience.

Despite having an interest in German history and being well read on the subject, nothing prepared me for the amount of detail and how moved I felt by standing in the exact site where such human tragedy was decided and occurred. As a result, I would urge you to take time to visit this very important destination. The destination is suitable for adults and those with certain disabilities, including individuals in wheelchairs. The destination is a very quiet museum as it respects and considers those that have tragically died; some tourists may feel that it is not suitable for young children.

Home to three institutions of terror over different time periods The Topography of Terror Documentation Center is an outdoor and indoor museum and the site itself was the home to three institutions of terror over different periods of time during the Nazi rule in Germany. Today, it consists of three exhibitions that I will briefly walk you through. The first exhibition is the “Topography of Terror: History of the Site”. This is an outdoor exhibition and covers the grounds of the site itself. There are 15 sections (also known as stations) with signs and information about each section of the site and what exactly stood there in history; it covers the Schutzstaffel, Gestapo and Reich Security Main Office.

This is because the site was first the headquarters of the Schutzstaffel also known as the SS. The SS was a paramilitary organisation under Adolf Hitler, which he had entrusted to be run by Heinrich Himmler from 1925 – 1945. Under Himmler’s authority, the organisation expanded within 12 months to having 3,000 members that were responsible for general policing and enforcing Nazi racial policy. The SS was initially and primarily responsible for running the ghettos, concentration camps and extermination camps. The SS firmly believed that brutality and terror was the solution to any problem that the Nazi party faced from opposition.

This site was the second “house prison” to the Gestapo. The Gestapo was the official secret police of the Nazi party. It was created by Hermann Goring in 1933 and was responsible for investigating cases of treason, espionage, sabotage and any form of other attack on the Nazi party. Goring passed the Gestapo over to Himmler in 1934 in order to make it more ruthless in respect to its purpose. The Gestapo became most prominently known for providing “protective custody”, which is where it took the liberty to imprison people without judicial proceedings. It targeted the Jewish community, homosexual individuals, those with disabilities and communist followers. The cells in which individuals were imprisoned and tortured can now be found on the site of the Topography of Terror Documentation Center.

Finally, this site was the headquarters of the Reich Security Main Office also known as the RSHA, which was created by Himmler in 1939. The objective of this organisation was to fight all enemies and opposition within and outside of the borders of Germany. It was responsible for gathering intelligence, conducting criminal investigation, overseeing foreigners and monitoring the public. However, most horrifically, it was responsible for selecting the individuals that conducted the mass executions of Jews and political opponents. Whilst it did this, the Gestapo decided who should be sent to the concentration camps. As you can see, any organisation during the Nazi period that was placed on this site had an aim to conduct terror to innocent people. 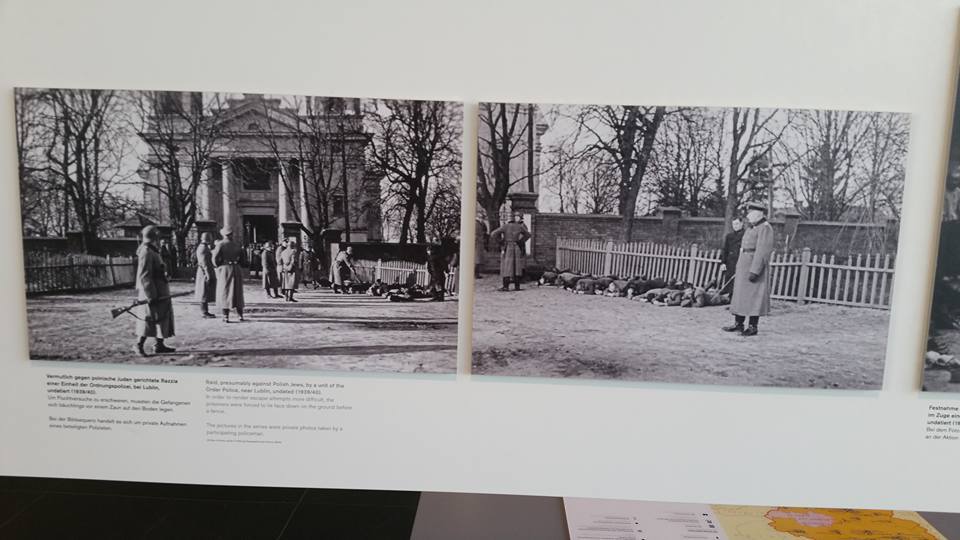 The second exhibition is called “Topography of Terror. Gestapo, SS, and Reich Security Main Office on Wilhelm-and Prinz-Albrecht-Straße”. This is located indoors and within the actual Documentation Centre. The Documentation Centre consists of a concrete square structure surrounded by glass windows, with the intention of the focus of the Documentation Centre being the contents included within it rather than on its external build.

The contents within the Documentation Centre are divided into 5 main categories. The first category is “The National Social Takeover of Power”. The second category is the “Institutions of Terror (SS and Police)”. The third category is “Terror, Persecution and Extermination on the Reich Territory”. The fourth is “SS and Reich Security Main office in the Occupied Countries” and the final is “The End of the War and the Post War Era”.

For each category, you will see a number of information panels with photos, maps, audio and visual displays. The information is exceptional in explaining the plethora of individuals including Hitler, Himmler and Goring and their respective terror organisations that were involved in causing an unbelievable and unbearable amount of harm to a magnitude of innocent individuals. The amount of detail provided per each category is tremendous and so very much informative and necessary so that humanity today does not forget how ugly the world had turned at one point in time, and to ensure that such instance never happens again.

Stop for a moment and fully connect with the information Whilst you walk through and read the information provided for each category, you should stop for a moment from reading and remember that the exact place in which you are standing is where the decisions about the horrors that you are reading were made. The Topography of Terror Documentation Center is the location where the persecution and extermination of so many individuals in Germany and abroad was organised and managed. It is one of the spots in which the co-ordination of the genocide of European Jews and so many other minorities was managed. The reason that I tell you to remember this is so that you can fully appreciate and connect with the information that you are reading and consider how fortunate we are to be alive and to have freedom.

If you find it difficult to read a significant amount of information, then do consider participating in the free guided tour offered in English, which occurs every Sunday at 3.30 pm in the Documentation Centre. The tour lasts one hour and you need to sign up at the reception at 3.00 pm. In addition, if you would like to learn more about the terror that occurred and analyse the individuals and organisations involved, then consider attending a free workshop offered by the Topography of Terror Documentation Center. As to the topics, dates and durations of such workshops, I would advise you to check the official website for the Topography of Terror Documentation Center. Please note that some of the workshops include a guided tour as part of the workshop. The third exhibition is called “Berlin 1933–1945: Between Propaganda and Terror”. This exhibition is outside the Documentation Centre and focuses on the role of Berlin under the Nazi party and how the Nazi party managed to gain so much control over the capital city. The location of this exhibition is along the walls of the original buildings that was last home to the RSHA. Above this exhibition is also the longest remaining piece of the Berlin Wall, which whilst belonging to a different part of Berlin’s history, is relevant to the fact as to what happened after World War II ended.

From this exhibition, you will learn about how a number of Berliners felt about the Nazi party and especially how and when the war began, they felt there was success and victory for their city and country. This was influenced by the propaganda on the one hand and fear of questioning the Nazi party on the other hand. The exhibition also teaches the aftermath, in that Berliners later saw how the war really affected them, in that their living conditions deteriorated because of the effect of the air raids. However, due to the authority of the terror organisations mentioned in this article, there was little resistance from the local population.

Each exhibition is informative and moving and you will find that you will spend an equal amount of time outside and on the site of the Topography of Terror as to the time you spend inside the Documentation Centre.

Take a 4 minute stroll to the Weltballoon With more than 600,000 people visiting the Topography of Terror Documentation Center each year, it is one of the most visited places of remembrance. After you have seen the three permanent exhibitions, I would recommend that you walk to Zimmerstraße 95, 10117 in Berlin, which is only a 4 minute walk from the Topography of Terror Documentation Center. This is because at this location is the Weltballon Berlin Dienstleistungs GmbH, which is a hot air balloon that will drift up to 492 feet (150 metres) vertically and will provide you with an incredible view of Berlin.

This view will include being able to see an aerial view of the Topography of Terror Documentation Center. This is important because whilst you will be able to see how large the site is by walking around it, you can only fully appreciate it in its entirety from above. From the hot air balloon, your pilot will also point out a number of the city’s main sights such as the TV Tower, the Berlin Cathedral, Brandenburg Gate and so on. Flights depart every 15 minutes, contingent on weather and a standard ticket for an adult is 19.90 EUR (20 USD) and last for 10–15 minutes.

Facing history's uglier aspects and confronting evil for a moment

There are certain sites in this world that one cannot fully grasp and value in respect to their historical significance until one is standing on such site concerned. The overwhelming emotions of shock and sadness that I felt when visiting Gleis 17 in Berlin and Eagles Nest in Bavaria made history come to life for the few moments in which I stopped, stood and fully absorbed what had occurred in these places.

I felt the exact same emotions when visiting the Topography of Terror Documentation Center and would urge that you visit this site and the others included in this article. It is terrifying to confront some of history’s uglier aspects and you will undoubtedly need time to reflect further about what has happened in the past. However, this fear is nothing in comparison to the suffering that millions faced during the Nazi reign and we as human beings, with liberty and freedom, should not forget the suffering that these people faced. By visiting the Topography of Terror Documentation Center, you are looking at the evil that took over Germany and impacted the world. Puja Modha has trained as a lawyer, worked as a compliance officer and is an experienced travel journalist that enjoys writing about her experiences across the world. She was born in England, her...Read more
Have a question? Ask fellow travellers and travel experts here.
Want to contribute as a Local Expert?
Register Here
Hotels
Lowest Price Guarantee