10 Top Fun Things To Do In Satun, Thailand

Satun, a small southern Thai province, lies at the border of Perlis, Malaysia. Its location allows the mingling of two distinct and rich cultures. The island is made all the more colorful because of its beautiful surroundings, which includes virgin islands, verdant forests, and towering mountains.

The combination of its unique culture and heritage, as well as its ambiance, makes this small province a place worth visiting.

Masjid Mambang, also known as Masayit Mambang or Satun Central Mosque, can be found at the town center of Satun. Its modern Islamic architectural style hints that it is a replacement of the original building, which was originally made of wood and has since deteriorated. The new mosque, completed in May 1979, is distinctive because of its golden dome. It has three-tier roofs arranged to resemble a pyramid, and is decorated with marble, glass, and glazed tiles. Non-Muslims can enter the mosque. Wat Chana Thip Chaloem is the first and the largest Buddhist temple in Satun, having been constructed in 1882. The temple has a distinctive look compared to other Thai temples, in that it is not a golden single-storeyed structure. Instead, its Ubosot (ordination hall) has two storeys: the first one, made of brick, serves as the preaching hall, while the second, made of wood, is where the monks hold their religious activities.

Wat Chana Thip Chaloem has been declared as an environmental preservation zone.

Satun is home to several caves. Arguably the most popular is Phu Pha Pet Cave, which is a large but deep cave with a high ceiling. “phuphaphet” is loosely translated to “diamond cliff,” referring to the sparkle of the stalactites and stalagmites in the cave when the light hits these. It is also known by the names Tham Lod, Tham Pet, Tham Phuphaphet, Phuphapet, Phuphaphet, and Tham Yao.

Another popular cave in Satun is Satta Khuha Cave, a limestone cave home to large bats. Inside the cave is a stream large and deep enough for people to row a canoe.

Chorakhe is also another cave that visitors can row through. It is said that the cave has only been explored from end to end once, back in the time when crocodiles still dwelled in its brackish waters. Visitors can go on a boat ride into the cave, passing by a mangrove forest on the way. Do note that you will need to bring your own flashlight and gear if you want to explore Chorakhe Cave.

Be sure to visit the tourism office before heading for these caves to get assistance.

Duration: You will need approximately one hour to go on a boat ride to Chorakhe Cave Satun National Museum, otherwise known as Ku-Den Museum, was originally built in 1902 as the residence of Phraya Phuminatphakdi, who served as a governor of Satun. It then served as a city hall, before being converted into a museum. It displays some artifacts and antiques showcasing the traditional culture of Satun. Some artwork made by local artists is also on display here.

La-ngu Local Museum serves as the repository of several handicrafts, including earthenware, brassware, silverware, glassware, wickerwork, and ceramics. It also houses several coins, banknotes, musical instruments, fans, and watches. Most of the items on display are owned by Chaiwat Saikun, a private collector.

If you are a fan of architecture, you may also visit Ku Den Mansion, which once served as the residence of a former governor of Satun, Rong Ammarttri Phraya Phuminart Phakdi (Tuanku Baharuddin bin Tamma-ngong). The building combines Western and Eastern architectural styles. Laem Tanyong Po is found at an estuary of Satun Bay. It home to a fishing village, as well as to a powdery, white sand beach.

Hat Pak Bara, meanwhile, is a pristine beach that has picturesque surroundings, with the islands of Satun visible over the horizon. This is a good place to visit for those who want to take scenic photos, or simply want to enjoy some quiet time at the beach.

Access: Take a boat either from Koh Nok Customs Office or from the pier behind Satun Central Market. Alternatively, you can drive 7 km (4.35 mi) from Che Bilang intersection to get here. 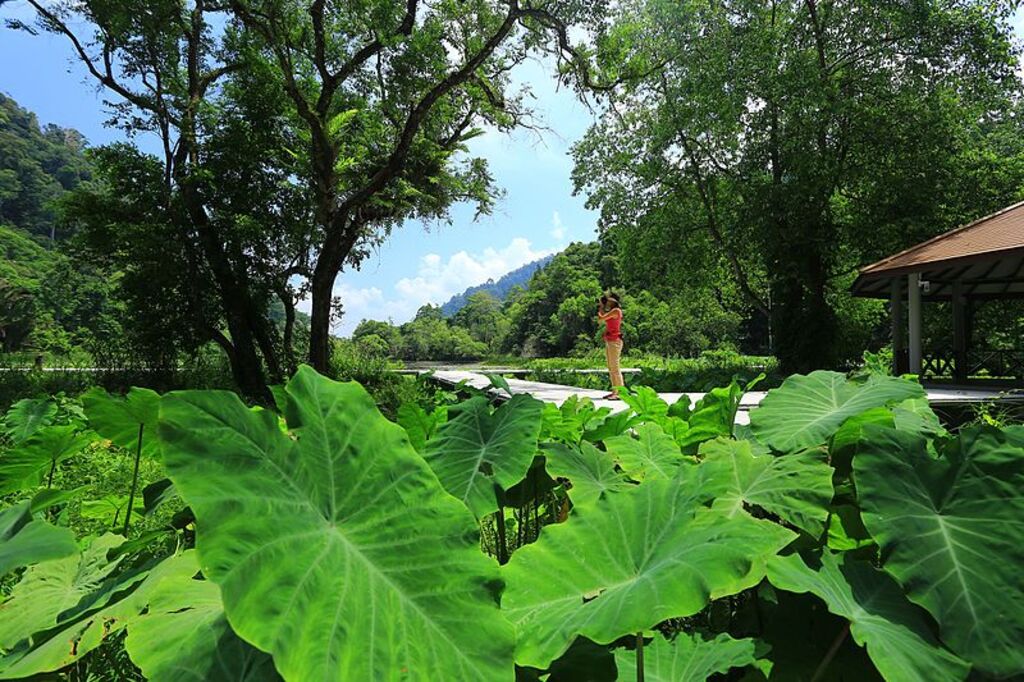 Thale Ban National Park houses a tropical rain forest, with pine as the prominent tree species there. Inside the park is Bueang Thale Ban, a freshwater lake home to a variety of freshwater fish, as well as some shellfish. The area was once a farm site, until a strong earthquake caused the ground to break and water to gush out.

If you are not in the mood for fishing, you can simply relax by the lake, as there are pavilions there for guests.

7. Climb to the Pha Chado Viewpoint The Pha Chado Viewpoint, found on the Koh Adang Island, gives climbers an unobstructed view of the sea. It once served as a lookout point for pirates scanning the waters for other vessels. 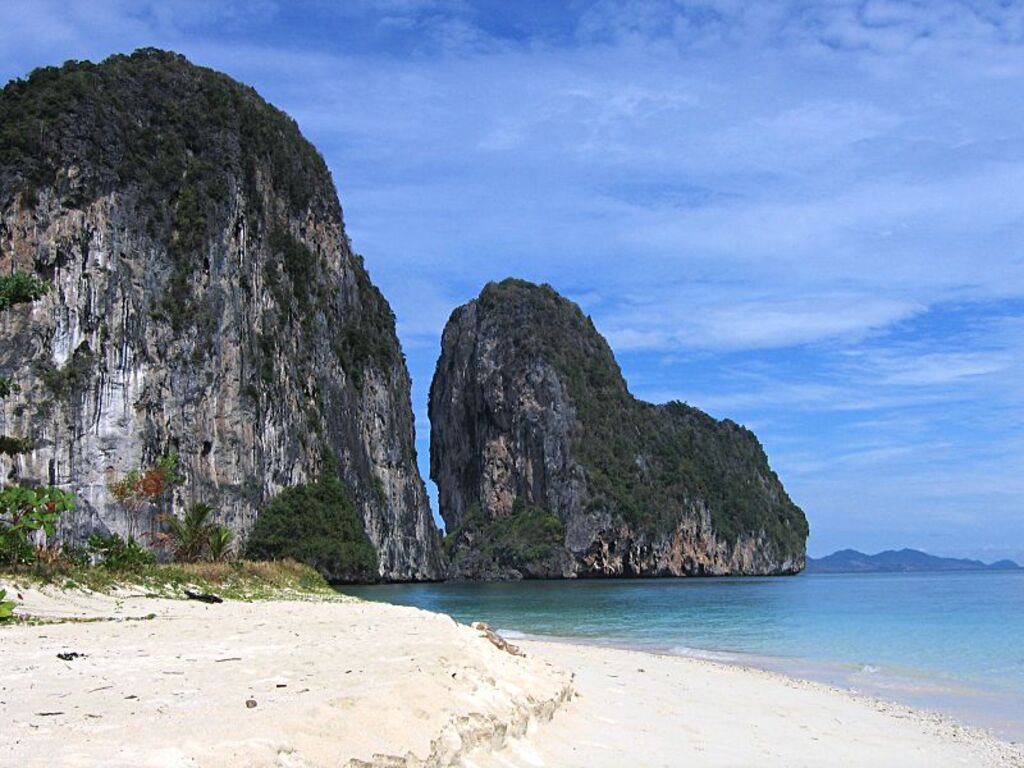 Lidi Island is home to thousands of swallows, which have made the caves in the island their home. During low tide, four islets will surface and connect to each other, with a sandbar forming a natural bridge connecting these. The island has camp grounds for those who want to stay there overnight. The island can be reached by car from La-ngu.

Bulon Island can be accessed by boat from Pak Bara Pier. It has been dubbed the “Pearl of the Andaman” for its rich underwater life, with colorful corals and various species of fish making this area their home.

Khao Yai Island is one of the islands of Phetra Islands National Park. Its rocky formation resembles a castle. Going here by boat is not difficult since the waters around it are calm practically all year round. Near the island is a pearl culture farm, which serves as a tourist attraction. The Satun Aquaculture Office can be found on this island.

Meanwhile, Tarutao National Park is also home to several islands — a total of 51 — in the Andaman Sea. It was declared an ASEAN Heritage Park and Reserve in 1982. The most well-known islands within the archipelago are Koh Tarutao, Koh Adang, and Koh Rawi. The waters along the area are protected, owing to the fact that various marine wildlife including dolphins, dugongs, and sea turtles have made this their home.

Bo Chet Luk Island (Seven-Well Island) is home to several beaches, the most popular of which is Hat Ka Sing, with its fine sand and interesting rock formations. This can be accessed via a boat ride from Pak Bara Pier.

Hin Ngam Island, or Pulo Island, is known for its beautiful rock formations. These were shaped by waves crashing into the walls. There are no accommodations or camp grounds on this island. The waters of the Wang Sai Thong Waterfalls flow across limestones, forming a picturesque scene for visitors.

Do note that access to the waterfalls is quite difficult, so only those who are physically fit are advised to attempt to get here. There are also no camping grounds near the waterfalls.

10. Explore the province of Satun and see the beauty of the blue Ka Sing Beach If you’re a traveler keen for an island escape, a trip to the beach is never a problem. When in the provincial areas of Thailand, make time to visit La-ngu District and find the beautiful blue waters on the Ka Sing beach. This beach is a popular fishing area and is scattered with boats and fishermen along with their humble community trying to make a living in this hidden gem of ocean blue wonder. Ka Sing beach is a quieter beach scoped with fine sand on a long stretch which many travelers strolling on come sunset. Ka Sing beach is remarkable for its uniquely formed rocks and shapes that bring character to the La-ngu District. Make your way into this serene stretch of beach wonder and experience a more subtle side of Thailand’s rural areas away from the busy Thai cities.

Satun may be one of the smallest provinces of Thailand, but its small size does not mean that it has little to offer visitors. From its rich culture to its beautiful natural attractions, this place has something to offer to everyone who wants to explore the off-the-beaten-track when visiting Thailand.