Alba Iulia Citadel: One Of The Biggest Fortresses In Eastern Europe

If you plan to visit Romania, then I highly suggest adding the Alba Iulia Citadel to your itinerary. The construction was completed in 1738 after the Habsburg Empire took control of Transylvania and the fortress had one of the most advanced defense systems of that time. The Austrians built the fortress to protect the area against the Ottomans and to secure their power.

Located in Alba Iulia City, in southwestern Transylvania, the 18th century citadel has now been completely renovated and looks amazing, giving you a great way to spend the day (no entrance fee). Today, it’s one of the best landmarks in the country, packed with museums, restaurants and walkways all around it.

The changing of the guard is also very interesting to watch — a display of Habsburg costumes, drums, torches and cannon firings. The ceremony takes place every day at 11:50 am and also on Fridays and Saturdays at 9 pm (from May to September).

Keep reading to discover the four landmarks not to be missed inside the citadel. The citadel has seven gates and the most impressive is, by far, the third gate. The classic baroque ornaments were intended to glorify Charles VI, the Holy Roman Emperor, who was also Prince of Transylvania during the first half of the 18th century. The Roman Catholic Church in Alba Iulia is the most valuable piece of medieval architecture in Transylvania. Inside the church lies the tomb of John Hunyadi, leading Hungarian military general and voivode (war-leader) of Transylvania.

National Museum of the Union The National Museum of the Union is very important in Romania’s history because it’s where the Unification documents were signed in 1918 that reunited Transylvania with the Kingdom of Romania. Today, the building hosts the history and archaeology museums with priceless artifacts from pre-Roman to modern times. Built soon after the Union of Transylvania with Romania, the cathedral was also the coronation place of King Ferdinand and Queen Marie as monarchs of Greater Romania in 1922. The cathedral was designed in the Romanian Brancovenesc architectural style and inside you can admire beautifully carved furniture in pure Romanian style.

A step back in time

Long brick walls, two beautiful cathedrals, Roman ruins, restaurants with outdoor terraces, plenty of full size statues, everything adds up to create a memorable trip back in Romania’s history and enjoy one of the best preserved citadels in Europe.

For a small fee, you can go inside the grounds of the Medieval Hotel to admire a fully restored traditional medieval building, as well as the beautiful, massive wood furniture. The hotel staff is also dressed up in medieval clothes, which adds to the charm of the place.

Plenty of small but distinctive details give a lot of personality to this place: from the guards dressed up in 18th century Habsburg uniforms, to the lounge areas inside the citadel designed as military camp forts, the numerous statues and the tourist signs all over the place.

Exploring the citadel is a real joy and I encourage you to make time for a visit during your next trip to Romania.The citadel is located in the heart of the city and there are signs pointing toward it everywhere, so you’ll definitely find it. 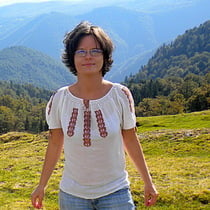 Hi! I'm Lucia, a Romanian travel writer and photographer, passionate about History & Culture, always keeping my eyes open for the next gem around the corner, whether it's a candid street shot at...Read more
Want to contribute as a Local Expert?
Register Here
Hotels
Lowest Price Guarantee