Goa is a go-to spot for anyone who wants to plan an adventurous holiday with friends. From exquisite beaches to beautiful churches, every facet of Goa has something unique to offer. However, Goa is so much more than just beautiful beaches. This beach destination is home to numerous haunted sites that have bountiful mysterious tales affixed to them. The horror tales linked to these places will not only give you chills down the spine, but they can also add an unusual experience to your Goa trip. So, if you are an adrenaline buff who is not afraid of spooky tales and dark places, scroll down to see some of the top haunted places in Goa, India.

A deserted road sprawled behind Our Lady of Snows Church, Igorchem Bandh is reckoned as one of the most haunted sites in Goa. The locals consider this spot to be haunted by evil spirits who huddle here during the nighttime. It is said that if someone walks on this street between 2am to 3am, they might be possessed by demons. If you are up for some peculiar experiences on your Goa trip, a visit to this road might be all you need.

A road stretched between Bori and Dhavali, the Baytakhol route is said to be haunted by a girl’s spirit. Locals believe that while driving on this road, drivers may lose their control due to the spine-chilling cries of the paranormal girl. A lot of people who have travelled on this route claim to have seen the lady standing in the middle, however, when they looked back, they couldn’t see anything but the empty road. If you are planning to visit this place, make sure to bring your friends along for a nerve-racking experience you can never forget. One cannot simply overlook the uncanny surroundings of this mysterious church, which also happens to be a popular sightseeing spot among the nature buffs. It is said that this church is haunted by the spirits of three Portuguese kings who lived here and fought among themselves to be the sole ruler. Later on, their bodies were buried in the church ground. If you want to go on an exciting adventure, this place is definitely worthy of a visit.

WOODEN CHALET ON THE RIVER BANKS

Cosy Apartments near the beach Serving as a connecting bridge between Margao in South Goa and Ponda in North Goa, Old Borim Bridge has numerous ghost stories as it is believed that several children were sacrificed during its construction. Additionally, plenty of people have reported seeing a lady jumping into the river from this bridge. Some people who witnessed this incident also considered the woman to be mad. However, when they got out of the car to offer the woman some help, they were shocked to find her in the back seat of their vehicle. If you are up for some spine-chilling adventure, you might want to visit this location with your travel companions.

Nestled between Navelim and Dharampur, this bridge in Goa has a tragic history. In the past, a school bus fell down from this bridge due to the driver’s mistake, and all the travellers were killed in the mishap. Several locals have reported having heard the voices of wailing kids while passing through this bridge in the nighttime. If it is a spooky adventure you are looking for, you can check out this interesting bridge. Situated at a distance of 15 km (9.3 mi) from Panaji city, Saligao Village is popular for its ghostly vibe and paranormal tales. This small village is said to be haunted by the spirit of a woman named Cristalina. People believe that her spirit has been residing around a banyan tree for the past six decades. There was another incident in which a man went missing for several days. Later, when he was found in wounded condition, he claimed he was taken away by the same spirit that is said to haunt the place. Cradled on the bank of the Zuari River, Rachol village is a breeding ground for paranormal activities. The story behind this horror spot goes back to the time when Goa was under Portuguese rule. During the Portuguese rule, this region was guarded by a soldier who did not allow anyone to enter the village if he/she appeared a misfit. There is an arch in front of the seminary, which is believed to still be guarded by the same soldier.

Nestled in Verna, The Rodrigues Home is another mysterious spot in Goa that is said to be occupied by spirits. Though the house may seem appealing from the outside, its inside might be terrifying enough to give you goosebumps. Locals have reported numerous spooky activities such as abnormal window movements, flickering lights, and opening and closing of doors while passing through the home. Popularly known as Mumbai-Goa Highway, NH 17 is said to be the hotbed for evil witches who roam around this region in search of meat. Hence, outsiders are advised not to take non-vegetarian food while passing through NH 17, especially during the late night. It is believed that if you carry non-vegetarian food through this route, your vehicle may suddenly stop or get out of control.

Located in Santimol, this is an abandoned house that is reckoned to be among the most haunted spots in Goa. The locals have reported several paranormal activities while passing through the house such as sounds of window panes cracking, weird noises, and abnormal footsteps. Apparently, the building was once occupied by two brothers who used to clash for the inheritance of this luxurious house. One day, they got into a violent fight, which ended with one of the brothers losing his life.

Though Goa is predominantly known for its captivating shoreline, leisurely vibe, and adventure sports, it is home to several supernatural sites as well, where you can experience some spooky adventures. If indulging in spine-tingling activities has always been your thing, you might want to explore the top haunted places in Goa, India. 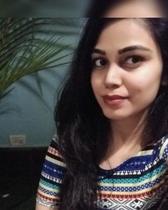 Hi, I am Priyanka Sharma, an inquisitive travel writer with over 3.5 years of experience in this field. Though I have pursued my masters in human resources from Pune, India, my undying passion for...Read more
Want to contribute as a Local Expert?
Register Here
Hotels
Lowest Price Guarantee

Explore Goa (state)
Good things are meant to be shared!