Walt Disney isn’t just in the United States. Many countries in the world also have their own form of ‘Walt Disney’ theme parks, and you will be surprised that Indonesia has long had one too! It’s the Dunia Fantasi (Fantasy World, also known as Dufan). Located in the Indonesian capital city of Jakarta, Dufan (established in 1985) is an integral part of the Ancol Dreamland Park (Taman Impian Jaya Ancol), which is visited by more than 10 million visitors every year. Whatever your reason for being in Jakarta, or whether or not you have been to another 'Walt Disney’ inspired theme park in another part of the world, Dufan is worth visiting as there are things you may not find in the theme parks in your home country.

It's a huge area Located in the North Jakarta district (close to mall named Mangga Dua Square), Dufan is huge. It covers a land area of 9.5 hectare (23.47 acres), and it is surprising to see such a big entertainment center in one of the most densely populated cities in the world. Like other theme parks, the most thrilling rides for children’s entertainment can be found here, including some new attractions that have been operating since 2014. 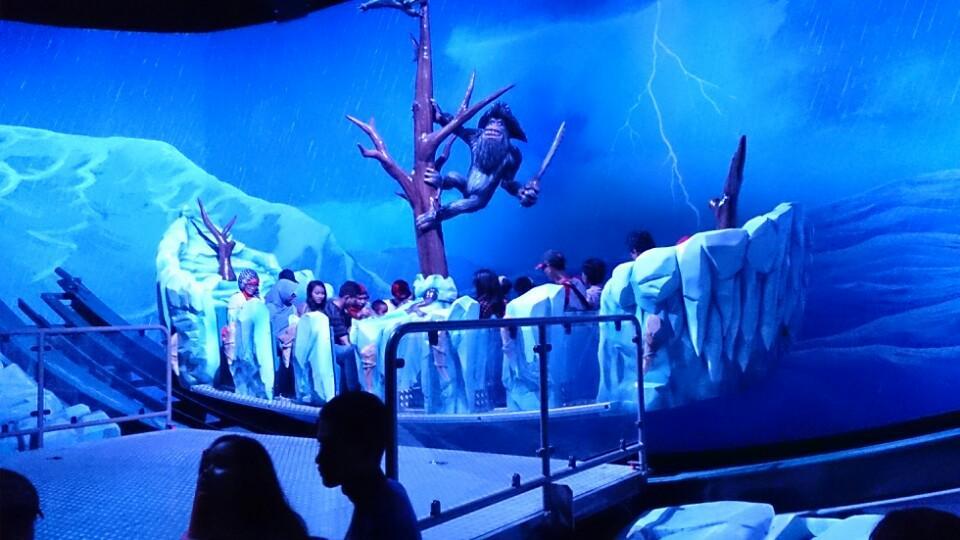 Starting back in January of 2014, and cooperating with the very prominent American film studio 20th Century Fox, Ice Age Sid’s Arctic Tour is the most popular indoor adventure in Dufan at the moment. It covers a land area of 2 hectares (5 acres), and no wonder this is so popular!

This is 1 of the only 2 Ice Age rides in the world (the other one has been operating in Germany) where you will meet the replicas of the 4 Ice Age main characters. During this 8 minute long ride you will have the pleasure of meeting: the good mammoth Manny, the clumsy sloth Sid, the tiger with sword-like fangs Diego, and the prehistoric squirrel that loves to consume acorns, Scrat. You and 9 other people will ride a boat down a dark and very cold Arctic river cave.

This is in a huge contrast with Jakarta’s hot weather that can reach well above 35 degrees Celsius (95 degrees Fahrenheit) at noon!. You will see walls of ice along the way, and at the river banks you will see some scenes from the Ice Age films displayed on big movie screens (e.g. the scene in one of the Ice Age movies when Sid was trying to cover the holes in the melting ice wall), and real talking replicas of the characters copying the words in some of the film scenes. The peak is when you ride pass an erupting volcano, where you will see a dinosaur there, and suddenly fall steeply to the part of the river below. After the ‘dark ride’, you will have a swinging-ship ride for a minute or so before exiting the area.

Travel around the world with Hello Kitty Hello Kitty is the newest adventure in Dufan, and has been operating since December 2014. Cooperating with Sanrio Co., Japan, this is one of the few Hello Kitty attractions in the world (the 2 others are known to be in Japan and Malaysia). There is no bumpy ride in here as it is about an edutainment show of Hello Kitty traveling to different countries and learning about different cultures. Kids love it as they can finally have their photos taken with their favorite Hello Kitty!

Ride Histeria for the ultimate extremity What is it like when an astronaut is being thrown into the sky inside a space shuttle? No need to be an astronaut to know the answer, because here in Dufan, you can feel the sensation too. From the ground, you will be thrown up 60 meters (197 ft) above the ground at a very high speed (it’s not as fast as a space shuttle during the take off, but enough to give you the picture of what it is like to be thrown into the sky), and as you get to the top of the tower, the machine will make several drops at around the same speed!

This is the newest adrenaline pumping adventure called Hysteria, and it has been operating since 2014. This has become one of the most extreme rides in Dufan, besides the tornado ride, where you will be swung, flipped, and dropped from the sky. Also, the halilintar (thunder) ride, is one of the fastest roller coasters in Indonesia.

Pick your own seafood at Bandar Jakarta There are many restaurants to choose from in the area, but where should you go? For the most popular dining place, head to a seafood restaurant named Bandar Jakarta, which is located by Jakarta Bay, and known for the freshness of its seafood. Eating here is a totally new experience for many people. You’re able to pick the fish, squids, scallops, lobsters, and even shrimp you like (the fish and lobsters are alive!), and tell the chef how you would like them to be cooked (e.g. with sweet and sour sauce, deep fried etc.). After that, you can pick your own table. I suggest choosing the one by the bay as you will feel the ocean breeze from where you sit.

Buy a Fast Track admission ticket during the high seasons

The admission ticket for the weekends and public holidays is 270,000 IDR (19.75 USD). However, on those days there are a great number of visitors, and many times you will need to queue and wait for more than 30 minutes for a single ride. Dufan, which is open from 10am to 8pm on weekends/public holidays, has more than 35 types of entertainment at the moment, hence you can’t cover all of them in a day. Especially on weekends and public holidays when there is a long queue for most of the attractions.

Don’t forget to apply sunscreen to your skin as you need to queue in the outdoor areas. For that reason, you need to make a list of priorities for a 1-day visit. There is a map in many corners that show you what attractions are available,however, there is a way if you want to cover more of these activities. Buy a fast track ticket for 450,000 IDR (33 USD) where you will have the privileged fast access to 12 kinds of favorite adventures. So what are you waiting for? Go to Dufan while you are in Jakarta!