Deep In Central Java: 10 Best Things To Do In Magelang, Indonesia - Updated 2021

Famous as the launching point for visits to the sacred 8th-century Borobudur Temple, Magelang is located in a scenic location, between Mount Merbabu and Mount Sumbing in Central Java. With a rich history as a military base, during Indonesia’s independence movement against the Dutch government, Magelang has more to offer as you travel further into the heart of Central Java.

It may not be as popular as the better-known Yogyakarta, but Magelang’s lively Chinatown, busy markets, green parks and surrounding landscape of lush hills, hot springs and volcanoes make it a varied and interesting place to visit. Start your holiday early by looking at the magical sunrise at Punthuk Setumbu Hill. Rising 400 meters (1312.3 feet) above sea level as part of the Menoreh Mountains, Punthuk Setumbu can be reached within one hour’s drive from Yogyakarta.

The best month to visit Punthuk Setumbu and catch the sunrise is between June – September. There are many sunrise tours that can be arranged from your hotel, while you are in Magelang. Make sure that you arrive at the base at least 5 am. Walk up the hill for a few minutes and wait for the sunrise from the mountain. As the sun rises and the fog disappears, you will be gifted with a burst of colour, with a glimpse of Borobudur Temple and Mount Merapi, in the background.

This experience gives a magical feeling and makes us realise the beauty of the world we live in.

2. Take on the rivers Elo and Progo Magelang sits between the Elo River and Progo River, and the rivers provide enough challenge for adventure seekers. Elo River, in the Mungkid region of Magelang, has 12 km (7.5 miles) of downstream river and you can traverse this length on an exciting river rafting trip, that will take you about three hours. Rafting here is suitable for beginners and intermediate level rafters.

If you want more a more challenging ride, the Progo River is categorised as difficult and will get your adrenaline pumping, during its 15 km (9.3 miles) rafting route.

Challenge yourself with a rafting trip and you will be granted with beautiful scenery along your journey. Java Island is the land of volcanoes and so is the Magelang Regency area. Mount Andong, one of the mountains located in Magelang, is often used as a place for climbing by nature lovers. Rising 1,726 meters (5,662.7 feet) above sea level, it is a friendly mountain to climb, with a route not as difficult as some of the other mountains, such as Mount Merapi, Sindoro, Merbabu, or Sumbing.

On average, you can climb to the top of Mount Andong within a two-hour hike. For those who want a little mountaineering adventure, within one day, Mount Andong is the perfect place. As one of the most popular mountains to hike in Central Java, Mount Merbabu offers spectacular views of other volcanoes, in all directions, when you reach the summit area. A dormant stratovolcano, unlike its highly active neighbour Mount Merapi, Mount Merbabu has five calderas, Condrodimuko, Kombang, Kendang, Rebab and Sambernyowo.

The best place to start your hike is from Kopeng because of its gentler slopes and a good source of water, halfway up. You can then descend to Selo. On average, the climb will take you seven hours and the descent will take you around five hours.

From the summit, you have a 360-degree vantage point of the unbelievable natural beauty that makes up the lush and fertile region of Central Java. To the west, you will see Mount Sumbing, Mount Sindoro and the Dieng Plateau and to the north, you can see Mount Telemoyo and Mount Ungaran. To the south, you will see Mount Merapi and to the east, is Mount Lawu.

This is one of the most breathtaking views in Indonesia and shouldn’t be missed. Ketep Pass, located between Mount Merapi and Merbabu, on the peak of Sawangan Mountain, is the area where you can get one of the best views of Mount Merapi, from a comfortable distance.

It sits 1,200 meters (3,937 feet) above sea level and has a mini cinema, which plays a documentary on Merapi’s volcanic activity, over the years, and a museum of vulcanology, which documents volcanic facts and samples of rocks from Merapi’s eruptions. You can reach Sekar Langit Waterfall within a 30-minute drive from Magelang city centre. The scenery at the waterfall is very beautiful and the sound of the gurgling water and shady trees that are around the waterfall, give you a feeling of serenity.

A perfect place to bath and relax - I guess that’s why the angels love this place, so much.

Bali to Java 2-Day Tour with Yogyakarta and Borobudur Temple

7. Tidar Mountain - the heart of Magelang With many large pine trees and salak (thorny palm fruit) trees, Tidar Mountain sits 503 meters (1650.3 feet) above sea level and is located in the heart of Magelang city. Mount Tidar is also a sacred area, where you can find several tombs of prominent propagators of Islam, who lived in Central Java. That’s why the place is also famous for religious tourism, especially the tomb of Sheikh Subakir, from Persia.

The climb up Mount Tidar is easy and very pleasant. From the top of this hill, you can see the town of Magelang, from a height. Alun-alun means piazza or the public area created by the local government and is used by citizens for public activities. Usually, the Alun-alun is located strategically in the city centre. From Alun-alun, you can explore the Chinatown, the oldest trade centre in Magelang, dating back to the colonial era and the Magelang Theatre, the only cinema in the city. To the south is Magelang Temple, used by the Chinese.

On the north side of Alun-alun is a Protestant church and to the west is Kauman mosque, the largest mosque in Magelang. North of Kauman is a Catholic church. Magelang Alun-alun is not only famous as the centre of public activity, but it also represents the religious diversity of the city, all living in harmony.

Spare some time to admire the famous Pangeran Diponegoro statue, one of the heroes of Indonesian independence. And don’t miss the famous water tower, on the northwest of Alun-alun, the city landmark from the colonial era. Stay a bit longer, until noon, when the local citizens start to come and enjoy the afternoon breeze, watch local band performances, eat local food, or just enjoy some chit chat. This area consists of numerous stones around two bathing pools, which derive from the nearby spring. Umbul Temple is a Mataram-era Hindu temple in Kartoharjo, Magelang. The temple is built in the 9th century, as a bathing and resting place for the King of Mataram. It is believed that the hot spring will make your skin healthier, due to the sulphur elements in the water.

Umbul Temple is open to tourists, including pilgrims and those who wants to bathe in the hot spring pool.

things to do in magelang indonesia | majestic borobudur temple After the sunrise, bring yourself to the well-known Borobudur Temple, the largest Buddhist temple in the world and a UNESCO World Heritage Site. The temple is one of the most famous icons of Indonesia and something you don’t want to miss when you visit Magelang. Borobudur Temple has been recorded as the single most visited tourist attraction in Indonesia. It is located in an elevated area, between two twin volcanoes, Sundoro-Sumbing and Merbabu-Merapi, as well as two rivers, the Progo and the Elo.

It is advised to visit Borobudur early in the morning, to avoid the crowds of students and tourists visiting in the day and to minimise the heat, since the temple is located in a tropical area, with lots of sunshine during the day. Prepare your water bottle and be ready to do lots of climbing on the temple’s nine flights of stairs. Find the best angle for your photos and take lots of beautiful shots of Borobudur and the surrounding area.

The lively city of Magelang

Deep in central Java, lies the lively city of Magelang, surrounded by beautiful landscapes. You will discover the magical Buddhist temple, surrounded by mesmerising views of the volcanic mountains, and a preserved tradition of the most friendly and polite people in Indonesia and maybe, the world. 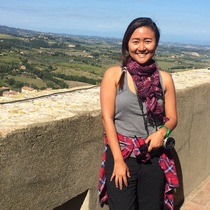 I’m an Indonesian girl who loves to travel the world. I’ve been to 4 continents, 17 countries, and still counting for more. I’m a Communication Specialist, Marketing Consultant, and Freelance...Read more
Want to contribute as a Local Expert?
Register Here
Hotels
Lowest Price Guarantee

Explore Magelang
Good things are meant to be shared!