You’ve probably heard of Indonesia’s most famous island, Bali, but Indonesia isn’t just Bali. There are thousands of inhabited and uninhabited islands and just in the northeast of Java, there lies an island that is worth visiting. The sites are just so unique and natural that you are probably wondering why there are not so many reviews of this island. Now, let us walk you through Madura to see its attractions!

Begin your journey at Surabaya The classic way to get to Madura is by a ferry, which will take about 35 minutes. You need to ride on a ferry from Tanjung Perak port, which is located in the northern part of Surabaya. Ferries are available daily from 8am to 8pm and the price is not expensive at all. You only need to pay 0.50 USD per person, or 4 USD per car to board the ferry. However, now that there is a bridge named Suramadu, opened since 2009, you may consider getting there by car; as not only is it a whole lot faster and cheaper (3 USD per car), but you can also appreciate the view of the blue Madura Strait along your way to your destination. While taking a ferry will take you more than half an hour, crossing the only inter-island bridge and the longest bridge in Indonesia (5.4 kilometers long) to Madura island will take you five to ten minutes. Upon your arrival in Bangkalan (the Suramadu bridge ends here), go eastward to the coastal city of Sampang to see the Toroan waterfall. The attraction, open all year round and priced at only 0.40 USD per person for the entrance, is a waterfall on the beach, hence the water goes straight to the Java sea instead of a river. Very rare phenomenon, isn’t it?

Toroan waterfall is open all year round and the admission ticket is incredibly cheap, 5,000 IDR (0.40 USD)! Moreover, the sea water is calm and many people swim around the waterfall, especially during the hottest season of the year (April to October), which is known as dry season. However, for those who don’t like to get wet, there is another way to have fun. Both the waterfall and the sea are beautiful landscapes for photography. So, grab your camera and shoot! Now you might want to visit Madura at your convenient time, but it is highly recommended that you visit the island between July to October. Why is that? This the period when Madura’s famous attractions of Karapan Sapi (Maduranese bull race) are held!

Now, this picture is for real. This is not a rodeo type bull taming. This is a bull race called karapan sapi. This young boy is actually controlling two huge bulls and standing on kaleles (a kind of plough made of bamboo that is put on the bulls, traditionally to plow the field and to race) in a 100-meter race!

Starting from July, the bull race is traditionally held in towns and villages across Madura. The winners will then race in the larger cities of Madura prior to the peak race in Pamekasan, which will be held in late September or early October. The winner will win piala presiden (trophies from Indonesian president, although the President doesn’t necessarily come to award the trophies). So, wherever you are in Madura during those months, you will see bull races here and there. If you’d like to see the peak of the occasion, you need to go to Pamekasan, which is one hour drive to the east from Sampang. In Indonesia, viharas can actually be found in all towns and cities where the ethnic Chinese community live, but this vihara has an interesting history. In the early 19th century, a farmer in northern Madura island accidentally discovered some statues in his field. Later, it was found that the statues had been sent from Majapahit empire in 13th century. However, the statues were abandoned, as people didn’t know the value of the statues. About 100 years later, an ethnic Chinese family bought the field and found the statues, which were similar to those that Chinese Buddhists worshipped to. One of the statues turned out to be the Goddess of Mercy (also known as Avalokitesvara in Sanskrit). This discovery spread among the ethnic Chinese community in Madura island and they built this vihara a few years later, adopting the Goddess’ name for the vihara where the statues are housed. 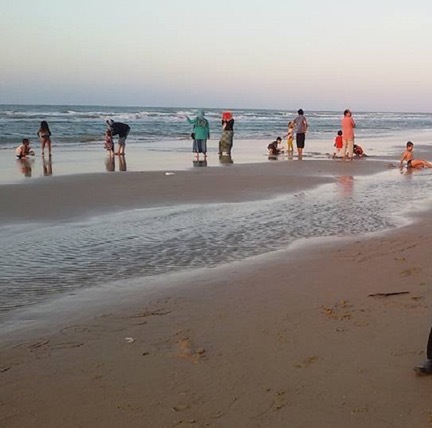 At the end of your Madura trip, go further east to the Lombang Beach in Sumenep, one of the beaches in the western tip of Madura island. You may wonder how beautiful this beach is, as the name isn’t as familiar to you as Kuta beach in Bali. Well, the beach is quite similar to famous beaches in Bali and can be quite crowded during weekends. However, you won’t find five star hotels and resorts or hawkers selling souvenirs and massage services. This beach is definitely cleaner. You can do beach activities like swimming and snorkeling. However, there is a dress code for women, as many female visitors here wear traditional kebaya (long skirt with flowery design). Sunbathing or wandering around with bikinis is not suitable here.

Rent a car from Surabaya

When in Surabaya, isn’t it a pity to miss Madura island? To visit the sites on the island, it’s highly advisable that you rent a car from Surabaya (the driver is usually provided). Don’t rely too much on the public transportation, as not many people here speak English. So what are you waiting for? Pack your bags and visit Madura!

Explore Madura Island
Good things are meant to be shared!