Many people know New York as the city that never sleeps, with all the excitement, the vibrancy, and much more you can find on every corner of the city. Little do people know that there is much more to the state of New York than this. If you move a little bit upstate on the map, you will find something entirely different than what the vibrant city usually offers, especially if you’re a nature explorer. Spelunking or cave exploring is an activity that’s popular among adrenaline junkies and nature lovers, and they consider upstate New York as one of the havens to dig deep and see what the Earth offers. Scroll down to read our recommendations of caving adventures in New York for your next outdoor holiday. Source: Photo by user ScubaBear68 used under CC BY 2.0

Pupper lovers rejoice! Sam’s Point Preserve is a caving spot that you can enjoy with your pooch, of course after making sure that your dogs’ feet are covered with shoes or something that can protect their precious paws since the rocks and stones can be too hot for them during warm weather. Sam’s Point Preserve is located at the Shawangunk Mountains, New York, at the southern side of the park. At this place, you can enjoy the sight of (as they say) Earth’s Last Great Place, a magnificent waterfall that drops to 180 feet (54.8 metres) below. The largest cave at Sam’s Point is Ellenville Fault Ice Caves from which you can feel chilling air coming out while exploring it.

Spanning 4,800 feet (around 1,500 metres) long, Clarksville Cave is known as one of the longest cave in New York state. There are three entrances to get into the cave, and the most popular one is called Gregory entrance, where it has a parking lot and changing facilities for visitors’ convenience. It’s advised that you wear warm clothing and durable boots to explore this cave since you will need to crawl around inside the cave and it can get wet and muddy. There’s also an underground river inside the cave, and you can bring your scuba gear if you feel like going for a dip. Don’t forget to bring a set of clean clothes to change after you finished and a bag to put your dirty and wet clothes in. It’s especially important to maintain silence in the cave after 9:30pm. Get ready for an adventure in a cave that’s family-friendly. Lockport Cave offers you a journey of walking through the water tunnel inside the cave and enjoying America’s longest underground boat ride along the Erie Canal. Many people would describe the boat ride as peaceful, although quite a few of them would also say it’s eerie, due to the lifeless water that the boats have to go through and the dark and quiet ambience surrounding them during the trip. The guides will tell you all the history about the place, from the fact that Lockport Cave was entirely human-made, to how the hydraulic tunnel inside provides water power to three industries. Knox Cave Preserve is located in Albany County, and it has two main caves that you can explore. One of them is Knox Cave that’s been commercialised back in 1933 to 1958, earning a spot as one of the most visited caves in the northeast of United States. Before you do so, you must obtain a permit and are required to follow the guidelines given at the site. Given the difficulties you will face while caving in this place, it’s well-known that Knox Cave is not a site for beginners. Including the parking spot, you have to park your vehicle in the given area.

Take your family for a journey deep down the Earth and see a waterfall that’s located 100 feet (30.4 metres) underground, from this funky place, Secret Caverns. When you arrive at the site, you will find that this place is targeted towards families with its vibrant and fun decorations. There will be 45 minutes to an hour’s guided tour along the cavern, and inside you can admire what nature has done to the place, from the natural stalactite and stalagmite to the limestone in the area. Also, be amazed by how the cave managed to maintain its natural temperature of -10 degrees Celsius (14 degrees Fahrenheit) the whole year round.

The cave is located not too far from Knox and Crossbones Caves in Albany County, New York. It’s a vertical cave that’s not too deep into the centre of the Earth and it gained its name from the inscription that can be found at the base of the entrance drop that said the name “Ella Armstrong”. Even though the cave needs extra attention, the place is suitable for all ages and people who’d want to try won’t need to ask for release form or special permission to make the caving trip. Even so, it would be wise if visitors who would like to explore the cave would bring their own pieces of equipment and gears. The cave is currently closed to preserve hibernating bats so do keep checking its website for announcements. Source: Photo by user xxxANDISxxx used under CC BY 2.0

The discovery of Howe Caverns is quite an exciting story to tell. One day, a farmer by the name of Lester Howe was investigating a particular spot where his cows usually gather. Lester ended up discovering a cave and he explored it with his friend, Henry Wetsel. Howe Caverns is an excellent place to have a day tour with the whole family, and even the excitement can be felt during the journey to this place where you can see beautiful scenery and views. Today, the fun at Howe Caverns doesn’t only come from the cave exploring and boat rides but also other activities provided by the company, such as Escape Room and Glassworks Workshops. Source: Photo by user Dion Raftopoulos used under CC BY 2.0

Onesquethaw Cave is the second largest cave in Albany, New York, and is also probably the wettest cave. The entrance is famous for being flooded up during the wet weather until they need to close the site during the time. However, during the dry season, after getting your written permission to explore the cave, you can enter the site and admire the fossils from the Devonian age all over the walls. Make sure you bring your wetsuit before entering the cave since the insides can be wet throughout the year. Do note that it is currently closed until April to preserve the hibernating bats. There are four caves at Sellecks Karst Preserve, they are Selleck Cave, Levys Cave, Cave 575, and Natural Bridge Cave, and the four of them each have their own characteristics. Selleck Cave is the largest cave on the site, with around 1,000 feet (304.8 metres) of path. As you enter the cave, you have to do a 20-foot (6 metres) drop to get to the bottom of the cave before exploring it. Levys Cave is a 200-feet (60.9 metres) long cave with a small stream insurgence, that collects water during spring. Cave 575 is also smaller, and to enter you also need to do a drop, although not as deep as Selleck Cave as it is only a 15-foot (4.5 metres) drop. Inside Cave 575, you can see an extensive display of fossils inside the walls. The last cave, Natural Bridge Cave, is more of a natural limestone bridge in the area. This cave is currently closed until April to preserve the hibernating bats.

Located around 90 minutes’ drive from the Lake Placid, Natural Stone Bridge and Caves is a part of the Adirondack Mountains, and it’s the largest marble cave of the United States. Due to its unique resources, caving is only one of many activities that you can do in this place. While you’re exploring the site, you can enjoy the scenery and admire the paths. Before going on the journey, make sure you’re wearing the appropriate footwear to avoid accidents.

Get your adrenaline pumping and go spelunking

With the right preparation and knowledge, exploring caves can be a fun activity to do for you and your companion. Even more, some caving sites also made their paths easier to trek so it can be an activity that can be enjoyed with the whole family. Inspired by our list? Off you go to your next adventure! 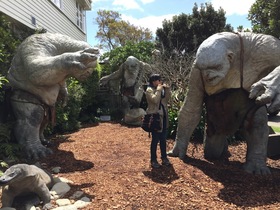 Elmo believes that visiting (at least) one new place every year would broaden knowledge, or simply makes the heart grow fonder (that if you still have one, of course). Seeing new places and...Read more
Want to contribute as a Local Expert?
Register Here
Hotels
Lowest Price Guarantee