Pesarean Gunung Kawi (a sacred tomb) is located atop a village that’s 3000 meters above the sea level on the slope of Mount Kawi. This is another very interesting destination to visit in the Malang area. The uniqueness of Mount Kawi has attracted many people to visit. They come mainly for vacation, but for some believers of animism called Kejawen, it is a pilgrimage site.

A tomb inside the Javanese house of Joglo Somewhere in Mount Kawi lies the resting place of Mbah Jugo (grandpa Jugo), a follower of a prince of Yogyakarta kingdom. Known as a wise man who liked to help those who are in need, Mbah Jugo was worshiped after his death, as many people believed that conducting rituals at his resting place will bring them good luck and their wishes will be granted. Interestingly, the tomb is inside a large site called joglo, a traditional Javanese house that consists of two parts, pendopo (the outer part consisting only roof and pillars) and daleman (the inner part that consists of rooms).

Although this is a good place for photography, taking pictures inside the house is prohibited because this place is believed to be sacred. Another interesting thing is that you will see a Buddhist temple and a mosque adjacent to the tomb house. Here, you will witness how the sanctuaries of three different faiths live side by side harmoniously, which is not something unusual among Indonesian people.

Heroic reliefs along the way to the sacred site The cemetery is located at the top of the village and on the way there, you will see several gates with reliefs that tell the story of how Mbah Jugo fought the war with Prince Diponegoro. The reliefs were carved by the followers in 1871 to monumentalize the heroic side Mbah Jugo.

Flowers for the rituals To do the rituals, believers will buy a package of fried lamb or chicken with white or yellow rice (rice colored with a yellow herb called kunir) for around 7.50 USD and a basket of roses for 1 USD. They then write whatever they wish to get or accomplish in life on a sheet of notepaper and together with the flowers and food, it is brought to the tombstone and a dukun (the Kejawen priest) will pray to the spirit asking for what have been written on the paper. The priest will then burn the flowers inside a large claypot and the fragrant smoke represents the pilgrim’s wishes.

The food, which is now believed to be blessed, will then be returned to the pilgrims. They are required to eat it so that their wishes will come true. Why chicken and why lamb? It’s not clear why, but those meats are provided by the tomb house and people can choose between the two. These are available along your way to the pesarehan. Food is sold in front of the Buddhist temple.

The village that resembles a Chinese town in the old times 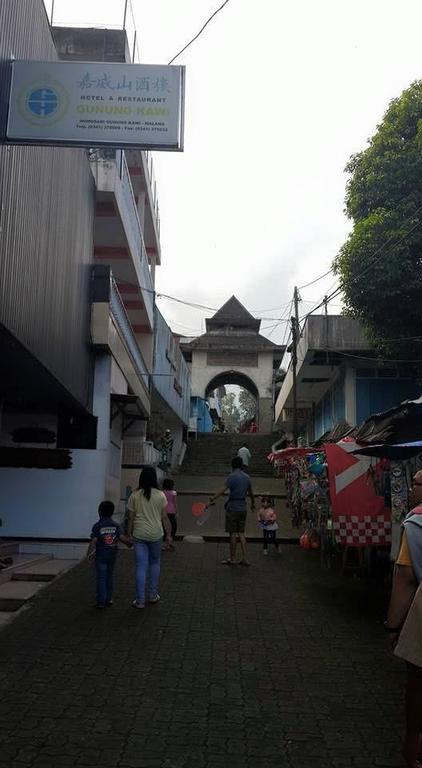 Mount Kawi has long been a famous place for the ethnic Chinese community in Indonesia. On your way to the top, you will feel as if you are walking in an old city of China! There are many people selling Chinese ornaments that are rare in Indonesia. Some examples are jade pendants, toy swords and spears and toy wine jar. You will also find one or two restaurants and hotels with Chinese characters written on their sign boards.

You may be curious whether or not the village has something to do with China, as Mount Kawi is several thousand miles away from China. Well, this village has its story. There were some people from the local Chinese community who conducted the rituals and they were believed to become fabulously rich or be healed from the sickness after the rituals. The rumors spread among the Chinese community and more Chinese resettled at Mount Kawi. In time to come, the village became known for the local Chinese community and they built a Buddhist temple near the pesarehan. As you spend more time there, you will notice that there are a few Chinese fortune tellers’ houses and you may wonder what they do. They are Chinese fortune tellers who are reputed to have the supernatural power of reading someone’s palms to predict his/her future! Have you eaten yam before? Yam is abundant in Mount Kawi. It is the main commodity for the locals. Yam is not actually a fruit, but a tuber crop like carrots and potatoes. While potato is tasteless without seasonings, yam is sweet and it has an antioxidant property that is beneficial for health in general. Normally, people steam it (the usual way that Kawi’s people eat it), but deep fried yam also tastes good.

Visit Mount Kawi or you will regret it

Mount Kawi has become popular across Indonesia as well as to some Chinese communities based overseas. This place is packed with people, especially during high season such as Lunar New Year or the Islamic holiday of Ramadan,. It’s quite easy to get here. Simply rent a car in Malang (it always comes with a driver) and the driver will drive you here. When you are in East Java, don’t forget to visit this village and see its uniqueness yourself!

He is a traveler, writer, translator and teacher who has written articles on many different topics, specializing in travel,business and tech. He has spent many years in the United States,...Read more
Have a question? Ask fellow travellers and travel experts here.
Want to contribute as a Local Expert?
Register Here
Hotels
Lowest Price Guarantee

Explore Malang
Good things are meant to be shared!