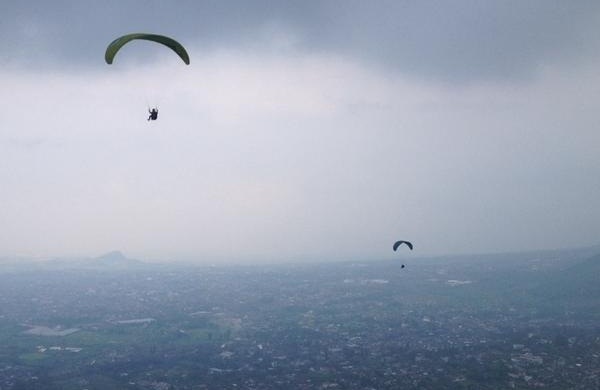 East Java, located to the west of Bali, is the fastest developing region in Indonesia which boasts itself for its natural beauty. Batu is in Eastern Java’s hill city, where you can find all kinds of modern entertainment, such as the Batu Secret Zoo, Transport Museum, East Java Parks, and the Batu Night Spectacular. However, there is a kind of adventurous entertainment in the city that you may also want to experience while in the city. It’s paragliding from the peak of Mount Banyak, which belongs to the regency of Batu. It offers you the spectacular view of the city of Batu, and its surrounding mountains.

You may have heard several times about paragliding, but may not know exactly what it is or may have mistaken it with parachuting. Like parachuting, paragliding is flying without any motor or gas power, but instead of jumping from a helicopter, a paraglider pilot takes off from a cliff, and they can control the paraglide in the air by pulling the brake lines connecting the harness (safety seat with a thick airbag that is designed for paragliding) to the wing.

Leave it all to your instructor You are not a paraglider pilot, so how will you fly? This is a tandem paragliding flight, and someone else with the particular capability will be the pilot. You will be the passenger, wearing the harness attached to the pilot’s. Like boarding on an airplane, before flying, the pilot will explain the parts of the paraglider and how they work (e.g. riser: the part which the pilot pulls during the take off, the brake handles: the part the pilot will use to make directions and descend, and the reserve parachute in case of emergency), which is an important part of the activity to make you feel secure, especially if you are a first-time passenger.

How about the pilot’s skills? Rest assured, because all pilots are paragliding pros who have attended a paragliding school, and received certification by the Indonesian Air Sports Association (Persatuan Layang Gantung Indonesia, also known as PLGI).

Not as scary as it may seem to be Paragliding here is much easier, and more fun than what you may think. When taking off from the peak of Mount Banyak, with the pilot behind you, simply run towards the cliff’s edge and hop! There you are in the open air! For first time passengers, this is the point where your fear comes to an abrupt end, as you will soon be overwhelmed with the feeling of awe. For 15 minutes you will be flying above the city of Batu, and you’ll see the houses in the city, and the mountains in the city’s surroundings. It’s only 15 minutes, so you want to make the best use of the time by documenting the moment. Who will do the documentation, you ask? You will do it. At the launching site, place your camera on its extender, tie the extender to your harness, and you are ready to document this rare moment! You will land in a large field in the Songgoriti district, and from here you will be driven back to the mountain peak. It’s important to note that since this is a tandem paragliding flight, you will land in a sitting position, with your legs stretched to the front, and your harness touching the ground first.

26 USD for the fun flight The flight only takes less than 15 minutes. It costs 350,000 IDR (26 USD) including the insurance and a certificate of participation, issued by the organizer, CV. Elang Perkasa (MIghty Eagle, Co.), which also has a paragliding school for those who want to be a professional. Make sure you bring your own camera, otherwise you need to pay 125,000 IDR (9.50 USD) to rent a camera. Those below 40 kg (88 pounds) of weight can’t participate, as they are just too small to fit into the harness.

Gaze the stars and city lights of Batu If you don’t paraglide, it’s very nice to just gaze out at the city and all the greeneries from the top of Mount Banyak during the daytime. If you can manage to go to the mountain peak at night, or early in the morning for the sunrise, you will see a totally different view. Under the stars and moon in the sky, you will find more ‘stars’ as the tiny buildings down below have changed into arrays of colorful lights. What a spectacular gaze!

Paragliding is a weather-dependant kind of sport. You can’t go airborne when the wind is either too weak or too strong, as you won’t be able to reach the landing spot, or the wing will be too difficult to control. During the monsoon season (October to April) the spot is still open for the activity. However, just like a plane flight, due to the rain, thunderstorms, and turbulence in the air, many times the scheduled paragliding flights have to wait, or are even canceled for the day.

This paragliding spot in Batu is one of the best in Indonesia. The national-scale paragliding competition was held here during the event of PON XV, the biggest national sports event in the year 2000. So, whenever you are in the province, don’t miss this spectacular spot.

He is a traveler, writer, translator and teacher who has written articles on many different topics, specializing in travel,business and tech. He has spent many years in the United States,...Read more
Have a question? Ask fellow travellers and travel experts here.
Want to contribute as a Local Expert?
Register Here
Hotels
Lowest Price Guarantee

Explore Batu
Good things are meant to be shared!